Believe it or not, the title is not all you need. There’s a key detail in this one that’s missing.

END_OF_DOCUMENT_TOKEN_TO_BE_REPLACED

This is a few months old, but worth noting:

A photographer and die-hard solar observer has captured absolutely stunning views of a colossal filament of super-hot plasma snaking its way across the surface of the sun. 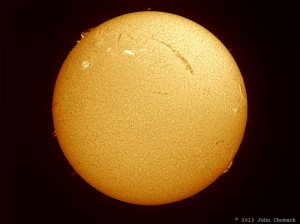 If you can’t do something with this for your Call of Cthulhu or other horror campaigns then… I dunno.  Have a sandwich and get a good night’s sleep, maybe? The campaign – or, more disturbing, background filler – writes itself.

I like headlines like that.  It makes reading the article almost superfluous.  There you go.  Man bites python.  Twice.  It’s against the law.  What more do you need?

File this in the “Elections have consequences” folder.  R.S. McCain:

Democrats in Congress are pushing legislation that would devastate the hobby — and damage the small businesses — of a group of American hobbyists: Snake collectors.

The Nonnative Wildlife Invasion Prevention Act (HR669), sponsored by Del. Madeleine Bordallo (D-Guam.) and co-sponsored by several House Democrats including Alcee Hastings and Ron Klein of Florida, has got the “reptile geeks” up in arms…

Essentially, somebody apparently watched some deep ecologist agitprop, got into freakout mode, and now wants to pretty much ban the import of animals into the USA.  At least, that’s how the U.S. Association of Reptile Keepers is framing this, and when you’ve got Alcee Hastings and Neil Abercrombie on one side of a debate and a bunch of sixteen year old kids who like boa constrictors on the other I know who I instinctively trust to have a better grasp of reality.  Hint: it ain’t a bunch of Democrats.

The good news is that this only has nine co-sponsors, so it’s not too high-profile (they must not have been able to figure out a way to sneak it into the Obama-Reid-Pelosi Debt Bill).  The bad news is that it’s not too high-profile, and the Democrats have sufficient numbers on hand to pass whatever damfool legislation they choose. Including bans on snake importations.

As I said: elections have consequences.