I opened up my latest batch – another thank you for the people who hit the tip jar, thus allowing me to pick up these things – to prep them for primer and I find… this. 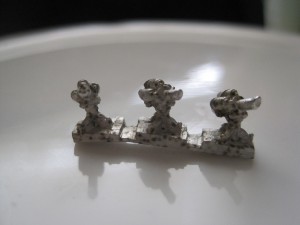 Good thing it’s probably not contagious, huh?  Damned if I know what caused this, though.  For all I know, metal minis rot if they’re seventeen years old (which is I think how old these suckers are).

PS: My wife – who is both an engineer and a minis painter herself (yes, I know, I am very lucky) neither gave an opinion on the subject, nor grabbed the children and ran from the house screaming at the sight.  So I’m assuming ‘weird, but harmless.’

PPS: Heavy weapons tripods for battlesuit troops, in case you were wondering.