This would be the print version of the Stand Still Stay Silent post-apocalyptic magical webcomic, which is brilliant and absolutely worth your time to read.

…Hrm. I wonder if Minna does book covers? 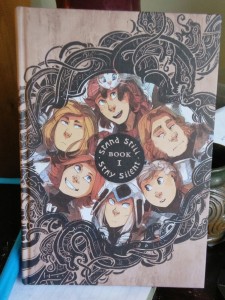 …and it promptly went upstairs to my wife’s desk. After all: I am fully checked out on the Stand Still, Stay Silent webcomic, and she is not. The sooner that I can get her addicted to this series, the better.

It really is an excellent Nordic/Scandinavian/Cold Places In Europe post-apocalyptic fantasy story with horrific overtones. You should go read the webcomic, if you haven’t.  For that matter, you should go read A RedTail’s Dream, by the same author (Minna Sundberg).

Link here.  Stand Still, Stay Silent, for those who don’t remember, is the best post-apocalyptic, Nordic/Scandinavian/Northern European themed horror webcomic that you’re likely ever to read.  The art is great and the writing keeps up with it; I love it to death, and so should you.

…and so goes away the PayPal reserves.  Ach, well, that’s what they’re there for.

This is very interesting: Stand Still, Stay Silent looks like it’s a post-post-apocalypse (plague?) setting, with a relatively uncommon setting (modern Nordic*) and a definite promise of Funky Weird Stuff.  It’s still within binge-reading territory, but apparently the comic updates every weekday, so start reading it fast.  So far I like it; I wonder if I’d like it more in book form, though.

Have bookmarked it, if that’s a consideration for anybody.

*I’d normally say ‘Scandinavian,’ but I had people point out to me recently that Finland (and maybe Iceland) aren’t quite part of that group.