If you are someone who has never read the book, or has read it but doesn’t really care at all about the movie following it, you may find this to be a fast paced, high tech outing in the sword and sorcery genre which you really enjoy. If you are anything approaching a Tolkien purist, you’ll probably leave the theater grumbling and cursing.

I AM a Tolkien purist, and I enjoyed the heck out of the movie. Unless Jazz Shaw means something else by ‘purist’ than I do, which is entirely possible. I cut my teeth on Middle Earth Role Playing, after all.  I have been comfortable with the idea of people expanding on the canon for… my goodness, it’s “decades” by now, isn’t it?

PS: Dag, but some of the Iron Crown Enterprises stuff seems to be going for a decent hunk of change.

…Lawsuits to bring them all and in the darkness bind them.

They’re preciousss, those nasty little hobbitses. We loves them, we does; oh yes. But not quite as much, perhaps, as the lawyers do.

The three Lord of the Rings films have taken just under $3 billion at the box office since 2001, and who knows how much more via home-entertainment platforms. Part one of Peter Jackson’s second trilogy, The Hobbit: An Unexpected Journey, has taken a shade more than $1 billion. The various merchandising spinoffs – a veritable storming horde of products including action figures, Lego sets, costumes and role-playing games – has generated untold millions more.

Little wonder this precious bounty has given birth to a whole other sub-industry – hotly contested court cases to determine the ownership and right to profit from all things hobbit-related. For those involved, the world created by J.R.R. Tolkien has become the one ring that binds them all … in endless litigation.

END_OF_DOCUMENT_TOKEN_TO_BE_REPLACED

…Can’t figure out when I’m going to it, either, but probably before the weekend’s over. Which is fine: it’ll give me a chance to get properly ready for it by watching this:

Oh, right, I keep forgetting that the original book had like, pretty much no women in it at all. Which is understandable in a 1930s children’s book for boys, but more than a little awkward for a modern Hollywood picture…

I’m down with this argument in defense of the Hobbit movie.

…if you want your children to imbibe the aesthetic feel of Tolkien and embrace his theology of mystery and grace, then read Tolkien to them, for crying out loud. If you want to watch a bunch of orcs get their heads handed to them, on the other hand, then go see the movie. There’s no need to constrain one with the other.

END_OF_DOCUMENT_TOKEN_TO_BE_REPLACED 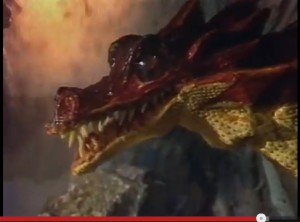 PS: Oh.  Right.  Music video.  Sorry, folks, after that I got nothing.  Besides, you’ve all figured out by now that it’s mostly an excuse to tos up those Amazon.com

…not that we know each other, or anything.

Alyssa Rosenberg – who is, by the way, far too smart and sensible about SF/fantasy material to be on ThinkProgress* – asks the question Should there have been any women at all in the Hobbit? – and her answer is doubly surprising.  First, because her answer was “No;” second, because I don’t entirely agree with her.

The first part is easily-enough understood; Ms. Rosenberg takes the reasonable view that there’s nothing inherently wrong, per se, about a movie that has what she calls “[a]ll-male spaces and social circles” as its background**. And if there’s a movie out there that would have an excuse to do that, it’d be The Hobbit, which is of course based on a 1930s child adventure story written by an English academic who had probably never really considered the issue in the first place***.  And that’s fine, and most people would agree that that’s fine. END_OF_DOCUMENT_TOKEN_TO_BE_REPLACED

At least, if you’re someone like me.  Peter Jackson made this movie for people like me, because at this point in his career he can.  My wife felt that it could have been cut down about a half hour – which is true, but IRRELEVANT – but she did appreciate that Peter put in a nice five minute walking sequence in the middle so that she could run to the bathroom and not miss anything.  I didn’t see it in 3D (or whatever the format is), and I don’t really care whether I do or not; so I can’t attest to the technical issues that some people were having with that version of the film.  Also: Andy Serkis is in fact ‘stuck’ with being remembered primarily for his role as Gollum.  He would probably be touched by your commiseration, if only he could hear it over the sound of all that MONEY.

All in all, no worries.

PS: Shockingly, there is a moment in this flick that reminded me powerfully of, of all things, Mass Effect.  Trust me: if you’ve played the original, you’ll know it when you see it.