I mentioned Space Eldritch a couple of days ago, and I’ve since read it.  It’s very nice, very nice: not explicitly HP Lovecraft, mostly – but it does combine cosmic terror with cosmic vistas (that’s Pretentious for ‘horror in space’) pretty well, and the writers are all pretty good.  I liked Howard Tayler’s story best… but only by a bit; and he has a bit of of an unfair advantage, given that Howard’s the guy who does Schlock Mercenary.  It’s only on the Kindle

And so, good-bye to The Hobbit

Just started my kids on the The Hobbit

; the youngest is ignoring, and the eldest was trying to… but I caught him being a little interested in it tonight. Just a bit.

A somewhat short tenure for The Last Days of Pompeii: Decadence, Apocalypse, Resurrection

, but I suspect that Victoria will forgive me.

I mean, obviously “Peter Jackson Opens Up About His Personal Hobbit Friends In Beginnings Of Genius Marketing Campaign Or Full-On Mental Breakdown” is an Onion article and thus not real, but hey: it’s not like the man was being portrayed as being dangerous, or anything.  Besides, isn’t Peter Jackson rolling in enough dough now that all of this would simply have been redefined as an amusing set of eccentricities, instead of schizophrenia?

Besides, the filming’s mostly done by now anyway.

Please, God, do not let it suck.

Of course, if the rest of the song is as good as that, then it’s looking good for not-sucking. Easily my favorite bit of poetry from The Hobbit.

I kind of agree with this sentiment about the Dwarven song from the Hobbit movie:

The only problem is that the above comment was actually from a spambot.

…but the damage is done.  I cannot conceive how anybody can continue to take the newspaper seriously after an error like this: 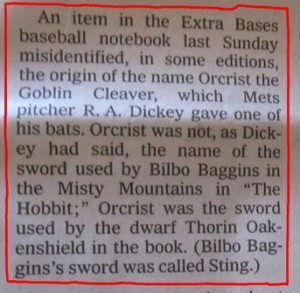 Jeebus, what do they teach people in J-School these days?

But I’ll be damned if I can think of many leisure activities off of the top of my head that’s preferable to sitting down and watching the The Lord of the Rings trilogy for the first time*.  Oh, there are a couple – but less than you’d think.

Anyway, here.  Have ten and a half minutes of footage designed to make you drool over the upcoming Hobbit movie.

*If you’ve never seen this in theaters… well.  I’m sorry for you.

(Via The Other McCain) This has been one of the more contentious film projects of recent memory – $400 million dollar projects tend to be – but it looks like that they’re running out of excuses to not put The Hobbit up on the big screen:

“The Hobbit” is now greenlit and will begin principal photography in February 2011, MGM, Warner Brothers, and New Line, have confirmed.

But don’t worry!  The unions are whining.  So there’s still a chance that the golden goose will still get killed.

PS: As I understand it, The Lord of the Rings trilogy generated 6 billion in revenue.  That’s why this project has been so contentious: because the odds that The Hobbit series won’t make its money back on the first movie alone are, to rip off David Brin, somewhere between ‘fat’ and ‘slim.’