They’ve tried everything else at this point: why not give it to a conservative?  I mean, can I really run The New Republic into the ground any harder?  Heck, I’m less likely to run it into the ground, honestly, because I’d feel bad about doing that. That magazine’s been around for all our lives, after all. It seems a shame for it to die.

I mean, this makes no sense.

Representing the views of one privileged class and appealing to a small demographic of political elites is the entire point of The New Republic. It certainly wasn’t to make money: people don’t make money in that particular business.  The goal is to shape the way that a particular group of people – people who are, let us not forget, powerful and influential – think.  If you’re not in it for that, why take a magazine that was doing that and try to turn it into something that it’s not? END_OF_DOCUMENT_TOKEN_TO_BE_REPLACED

Gotta say, this particular take on the New Republic flap resonates with me.

If I have to pick sides between liberal policy journalists insisting they are immune to the reality of business economics and a Silicon Valley enfant terrible who tried to buy his hapless husband a Congressional seat, I’m afraid I’m left rooting for injuries.

END_OF_DOCUMENT_TOKEN_TO_BE_REPLACED

In case you missed it: the two top guys (Franklin Foer and Leon Wieseltie) quit TNR today, in what they would call ‘high dudgeon’ and I would call ‘a snit.’ It’s a justified snit, honestly – owner Chris Hughes (still smarting from his inability to buy a House seat for his husband) apparently decided to finally demonstrate to TNR that it’s a product, not a magazine – but a snit nonetheless.  Topping on the cake?  What Politico neglected to mention is that the new editor (Gabriel Snyder) used to work for Gawker.

Gawker!  It’s a miracle that the remaining staff didn’t commit seppeku en masse at the shame.

PS: Chris Hughes is never going to be invited to certain parties ever again in his life. Not parties that I or you would want to go to; but parties that he might have.

You have to laugh, because the alternative is to… well, laugh. In that way that makes people nervous.

…said method of ‘voter suppression’ being ‘forcing Kansas Democrats to confront the fact that they nominated an absolutely horrible candidate for Senate.’ Amusingly, at this moment TNR’s own comments section (link below) is throwing tomatoes at the author; this will change, but in the meantime… chortle. Just not in a fashion that will have your neighbors call the cops.

Sure, TNR gets points for finally admitting reality.

Here are Romney’s remarks, in their full context, which came during a conversation with Wolf Blitzer:

…but that’s not enough.  I mean, I know that it’s hard to admit that you were wrong about something, and that you’re sorry: as I said, I have a seven year old that needs to be prompted about that from time to time.  But he’s seven.  What’s TNR’s excuse?

Ain’t that a shame. END_OF_DOCUMENT_TOKEN_TO_BE_REPLACED 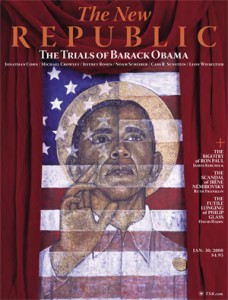 Wait.  This stuff is bad?

OK, I don’t normally fisk, but I gotta do this one. From The New Republic’s rather alarmed profiling of Senator Rand Paul:

In the Senate, Paul gained a reputation as an eccentric. Staffers often saw him wandering alone into the cafeteria, buying his own coffee, getting his own lunch—which, they noted, was not very senatorial.

That’s a damning indictment of the Senate, frankly.

Nor was his reputation for reading every page of every bill.

This title/classical reference is an honor, in its way: RedState has traditionally reserved it for spectacularly exgregious cases of public stupidity. But this Martin Peretz complaint about what has happened to The New Republic (TNR) since he sold it certainly qualifies:

“Original Sin,” by Sam Tanenhaus, purported to explain “Why the GOP is and will continue to be the party of white people.” The provocative theme would not have been unthinkable in the magazine’s 99-year history, but the essay’s reliance on insinuations of GOP racism (“the inimical ‘they’ were being targeted by a spurious campaign to pass voter-identification laws, a throwback to Jim Crow”) and gross oversimplifications hardly reflected the intellectual traditions of a journal of ideas. What made the “Original Sin” issue unrecognizable to this former owner is that it established as fact what had only been suggested by the magazine in the early days of its new administration: The New Republic has abandoned its liberal but heterodox tradition and embraced a leftist outlook as predictable as that of Mother Jones or the Nation.

So, let me get this straight. Martin Peretz sells his magazine to Chris Hughes, who prior to the sale was talking up how he had no intention of being a doctrinaire liberal editor of TNR.  After the sale, Hughes then turns right around and makes TNR into an open propaganda organ for the Obama administration.  No doubt stung by the sudden frost on the DC cocktail circuit*, Peretz is now openly fuming about what Hughes did to his magazine. END_OF_DOCUMENT_TOKEN_TO_BE_REPLACED