In all its glory. 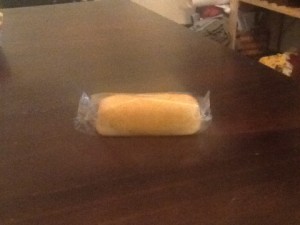 END_OF_DOCUMENT_TOKEN_TO_BE_REPLACED

Actually, what I want are Ho-Hos, but I’ll buy some Twinkies too, ya, you betcha. The local supermarket and the Target have both said no, not yet… but I have not yet begun to call around.

[UPDATE: Well.  The Walmart said that they had them… but the woman on the phone seemed to think that they’ve always had them, too.  Report… dubious.]

ThinkProgress is rather gloomy about a wonderful bit of news: Twinkies are back on the shelves!

Hostess used to employ about 2,500 workers to produce snacks, but the new iteration will use just 1,800, according to a spokeswoman for its new private equity owners. The reduction in jobs is thanks to an increasing use of machinery instead of workers, dropping some of the former Hostess brands, a new model for delivering products, and closing nearly 600 outlet stores in which it used to sell products directly to consumers.

Those who do get their job back won’t see the same pay, however. Employees are now making far less than they were before the liquidation.

And the workers who are hired back will no longer be unionized. Where nearly 80 percent of the workers were part of a union before the liquidation, today none will be.

…and they didn’t take the right lesson from this.  To wit: to blazes with the stupid baker’s union that didn’t understand that the plants were going to close; and to blazes with the Teamsters, who refused to negotiate on Hostess’s downright insane distribution model.  I assure you: Hostess outlet stores were a bad idea.

Note what Hostess is tagging the box with, too:

The company that went bankrupt after an acrimonious fight with its unionized workers last year is back up and running under new owners and a leaner structure. It says it plans to have Twinkies and other snack cakes back on shelves starting July 15.

Based on the outpouring of nostalgia sparked by its demise, Hostess is expecting a blockbuster return next month for Twinkies and other sugary treats, such as CupCakes and Donettes. The company says the cakes will taste the same but that the boxes will now bear the tag line “The Sweetest Comeback In The History Of Ever.”

END_OF_DOCUMENT_TOKEN_TO_BE_REPLACED

Alternate title: “Sir, the Twinkies are back online!”

Basically, the new owners (Apollo Global Management LLC, and Metropoulos & Co.) aren’t subject to the old union contract from the Bakery, Confectionery, Tobacco Workers & Grain Millers union (BCTWGM).  As you may recall, BCTWGM more or less killed the old Hostess company (which, admittedly, was on life support anyway) last year when it decided to play some rather ill-timed hardball.  When the Teamsters are waving off your strike threats… well.  The BCTWGM has paid for their folly, no? END_OF_DOCUMENT_TOKEN_TO_BE_REPLACED

Very possibly.  Background here and here: the short version is that Hostess Foods is in horrible financial shape; it’s in the process of trying to stave off bankruptcy via drastically renegotiated emergency union contracts with the Teamsters and bakers’ unions; the Teamsters took a look at the books, blanched, swallowed hard, and took the deal; the bakers’ unions did not, and decided to go on strike; and Hostess basically told the strikers that if they didn’t stop striking by end of business today that the company would just go ahead and shut down.  The end of business came and went; and now we’re going to see whether Hostess will go through with their promise/threat.

And how serious is this threat? This serious:

The Teamsters meanwhile are urging the smaller union to hold a secret ballot on whether to continue striking. Citing its financial experts who had access to the company’s books, the Teamsters say that Hostess’ warning of liquidation is “not an empty threat or a negotiating tactic” but a certain outcome if workers continue striking.

END_OF_DOCUMENT_TOKEN_TO_BE_REPLACED

5 PM deadline, EST. No deal, no Hostess foods, no Twinkies. And all the posturing in the world by the American labor movement won’t bring back the company, once it’s gone.

Hey, don’t look at me: these guys are all part of the Democratic party’s coalition.  Not my doing. 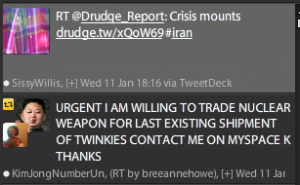 OK.  That was funnier yesterday than it was today.