Yeah. Calling in the high-powered lawyer isn’t a sign of anything wrong.  Nope, not at all.

U.S. Sen. Tammy Baldwin is finally speaking out about her decision to fire a staffer over the problems at the troubled Tomah VA Medical Center.

Or at least her nationally renowned Democratic attorney [Marc Elias] has issued a statement defending the move last month to oust Marquette Baylor, ex-deputy state director for Baldwin and chief of her Milwaukee office.

Baldwin’s office sat for months on an inspection report that found officials at the Tomah medical center were prescribing high amounts of opiate pain pills to patients. She began calling for a federal investigation only after news reports ran in January showing that as many as three vets died after receiving treatment at Tomah.

END_OF_DOCUMENT_TOKEN_TO_BE_REPLACED 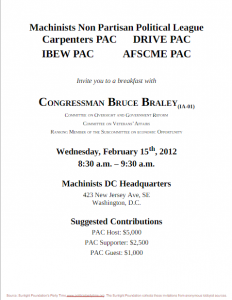 Now, you may be going So what? Everybody knows that all Democratic politicians suck up to Big Labor.  This isn’t news.  …Well, that’s a cynical way of looking at it, but never mind that right now.  The question is, what should Bruce Braley have been doing on that day? END_OF_DOCUMENT_TOKEN_TO_BE_REPLACED

Remember: the Veterans Administration was held up as a shining beacon by the Left on how to do socialized medicine.  Or should I say ‘Socialist?’ – Because this story is certainly, ah, evocative:

As the hearing stretched into the night, [House Veterans Affairs Chairman Jeff] Miller told the committee about a visit some committee staff took to the Philadelphia Regional Office earlier this month. As several committee aides were preparing to meet with officials July 2, one aide visited the restroom. In the restroom, the committee aide found a notebook that belonged to Acting Regional Director Diana Rubens,  apparently directing an official preparing for the briefing to ignore a certain committee aide’s questions. The notes also listed the names of two whistleblowers the committee had been in communication with as well as the names of committee investigators.

Rubens, who claimed that her comments on the notebook were taken out of context, and that she simply wrote the names down when they were mentioned to her.

The committee investigators were directed to a workspace at the regional office which was outfitted with cameras and microphones. Upon discovering they were being monitored, the aides requested to be moved.

END_OF_DOCUMENT_TOKEN_TO_BE_REPLACED

There Politico goes, putting words in our mouth again:

GOP leaders and officials have spent the last week talking about the backlogs and misconduct, but what they’re hoping voters hear is: Obama is still an unprepared executive who needs to be stripped of power in the midterms. Once again, they say, he’s presenting himself as an angry bystander, confronted with high-profile management failures on his watch that he says he learned about from news reports.

Unlike in October, when Republicans focused their message on calling for Health and Human Services Secretary Kathleen Sebelius to be fired, they’ve gone broader now, saying this is about more than VA Secretary Eric Shinseki, whom most have avoided calling on to resign or be fired.

This, they say, is much, much bigger — the phrase that House Speaker John Boehner (R-Ohio) and his colleagues have been emphasizing is “systemic failure.”

END_OF_DOCUMENT_TOKEN_TO_BE_REPLACED

“Right now, as we speak, a concerted effort to undermine the VA,” [Bernie Sanders] said. “What are the problems? The problems are, is, that all of these are large, governmental institutions and you have folks out there now, Koch Brothers and others, who want to radically change the nature of society, and either make major cuts in all of these institutions, or maybe do away with them entirely.”

And here I thought that the problem is that the VA was covering up the fact that veterans were being denied timely care, and in some cases fatally so.  Silly me: I should have realized that it was all a right-wing plot.  And you just know that next they’ll be spying on Bernie Sanders! Spyin’ on him with RAYS!

PS: Bernie Sanders is the chair of the Veterans Affairs committee.

…only this time it had a very welcome sentence in it.

“Mr. Steele declined a request for an interview.”

Dan Riehl caught this first, and I concur: there are times when you pick yourself up, walk it off, and get back to work – and Steele’s gotten to that point. Yes, the media doesn’t love the GOP, except as a punching bag. And yes, the media loves to see Red-on-Red fights, the latest of which has spent far too much time occupying people’s brains than it should have for the last two weeks. And yes, there are ongoing philosophical issues between the various factions of the GOP that are causing all sorts of dynamic tension / impending meltdown / what have you.

Meanwhile, there’s a race going on up in NY-20. Is that less important to you than whether Steele’s sufficiently pro-life? If it isn’t, Tedisco can always use the help. There’s also a race going on over in IL-05. Are you looking for a better hill to fight and maybe die on than whether or not Rush is going to doom the GOP? If you are, Pulido wants to hear from you. Virginia and New Jersey are having elections for governor this year. Are you tired of the debate over who should be the next Presidential candidate? Then the NJ GOP and the VA GOP would be happy to redirect your interests to something a bit more topical.

I could go on, but hopefully you get the point. There is business that must be attended to, and at this point we are merely amusing the Other Side.