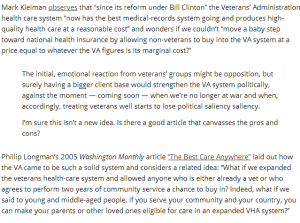 END_OF_DOCUMENT_TOKEN_TO_BE_REPLACED

And the President actually dug himself in a bit deeper with the resulting press conference.  Maybe I’m just being a weary cynical partisan about this, but the man’s continuing ‘surprise’ over every bad thing that ever happens grates on me.  Listening to him, you’d never know that Barack Obama campaigned on the Veterans Affairs issue…

PS: On a more general note? Don’t appoint antiwar partisans to important positions.  As Eric Shinseki just demonstrated, they’ll only screw it all up.

I would like to assure my readers that the following is neither a Saturday Night Live skit, nor a Onion News Network video special.  The woman shown in it is Corrine Brown, who is indeed a sitting Congresswoman from Florida.  Florida’s Fifth district, in point of fact.  And that is very likely even her own hair.

END_OF_DOCUMENT_TOKEN_TO_BE_REPLACED

This is one of those stories that you actually hope to God never happened, because of course you’d prefer that somebody lied to you about a veteran getting beaten by cops than for it to actually have happened.  But it’s being reported in local news, too: the short version is that the widow and family of Jonathan Montano claim that Veterans Affairs Police essentially beat Mr. Montano into having a eventually-fatal stroke as part of their restraining of the man during an argument over treatment. The VA did its own investigation, which concluded that the man fell and hit his head; the problem for the VA here is that the percentage of the populace that are ready to trust anything that the VA says these days has significantly dropped.

I mean, under normal circumstances I might not have even written about this – but this was before I had it ground into my face that the federal government has spent the last five years covering up fatal service delays in VA hospitals.  Exactly how am I supposed to give them the benefit of the doubt, here?  Not just why: how?  For all I know, VA cops get extra overbearing whenever they think that they can get away with it.  …And that is one major, often under-emphasized, problem with things like the VA scandals; to wit, those scandals erode basic trust in the institutions that are caught up in them. END_OF_DOCUMENT_TOKEN_TO_BE_REPLACED

Dagnabbit, Jim Geraghty got to this story before I did*:

Senate Democrats are closing ranks behind Secretary of Veterans Affairs Eric Shinseki and President Obama’s decision to keep him in the cabinet despite Republican calls for his ouster.

As of Thursday afternoon, not a single Democratic senator had called for Shinseki’s resignation.

And Senate Democrats have been slow to embrace House-passed legislation that would give Shinseki the authority to fire senior executives.

END_OF_DOCUMENT_TOKEN_TO_BE_REPLACED

Calling for the resignation of Eric Shinseki over the contemptible actions of his Veterans Affairs bureaucrats is about as softball as you can get in a red state like Georgia, and Michelle Nunn just utterly whiffed it.

Here was her chance to distance herself from Obama for real. Nope. #GASen https://t.co/GHgEvQjI7L

“I defer to the President’s judgement.” Yeah, Michelle, that would be the problem with you being Senator.

How many Veterans Affairs offices did this, anyway?

A Department of Veterans Affairs scheduling clerk has accused VA officials in Austin and San Antonio of manipulating medical appointment data in an attempt to hide long wait times to see doctors and psychiatrists, the American-Statesman has learned.

In communications with the U.S. Office of Special Counsel, a federal investigative body that protects government whistleblowers, the 40-year-old VA employee said he and others were “verbally directed by lead clerks, supervisors, and during training” to ensure that wait times at the Austin VA Outpatient Clinic and the North Central Federal Clinic in San Antonio were “as close to zero days as possible.”

END_OF_DOCUMENT_TOKEN_TO_BE_REPLACED

This time, in Colorado.

A VA investigation of one of its outpatient clinics in Colorado reveals how ingrained delays in medical care may be for an agency struggling to rapidly treat nearly 9 million veterans a year amid allegations that dozens have died because of delays.

Clerks at the Department of Veterans Affairs clinic in Fort Collins were instructed last year how to falsify appointment records so it appeared the small staff of doctors was seeing patients within the agency’s goal of 14 days, according to the investigation.

END_OF_DOCUMENT_TOKEN_TO_BE_REPLACED

There’s been quite the flareup over the disastrous Shineski comments on potential changes in veteran policy, and the Democrats in Congress have wasted no time in distancing themselves from the administration on this one. As just one example, we have Senator James Webb*: when contacted regarding the recent CNN article indicating the possibility of a “controversial plan to make veterans pay for treatment of service-related injuries with private insurance,” Webb’s office provided this response from the Senator: “Treatment for service-connected injuries is clearly within the responsibility of the U.S. government through the Department of Veterans Affairs—period.” This statement to RedState is a duplicate of the statement also made to the Huffington Post; the story there also mentions a letter being put together by House Democrats opposing any such change. Very, very, loudly, and to anyone who will listen.

It’s become increasingly obvious that the administration’s tin ear when it comes to dealing with groups not inclined to be forgiving about it remains in full force. They haven’t gotten any faster at correcting their mistakes, either: Obama’s profoundly unsuccessful meeting with American Legion President David Rehbein should have been resolved yesterday, not tomorrow. Assuming that it will be: it’s possible that Obama will try an I-won and a flash of the charisma that he does not, in point of fact, actually have.

No, really. Bill Clinton would have had Rehbein walking out of there all smiles in the first place. For that matter, so would have George W Bush; but then, Bush had the advantage of being a Republican.

*I’ve also contacted Senator Patty Murray’s office, but they haven’t gotten back to me yet.