The Witcher 3 Enhanced Edition mod looks pretty comprehensive.  Basically, they yanked out leveling and Geralt’s ability to be better at combat than you are.  Now you have to actually pay attention to where the sword goes and how far away your target is and a bunch of other stuff. It’s simultaneously fascinating…

…and something I refuse to load.  I’m in my late forties.  I appreciate that Geralt is better in combat than me.  He ought to be, after all.  But, of course, your mileage may vary.

Today in your mandatory The Witcher: Wild Hunt news:

Yeah, I know: they shouldn’t have to have needed a 1.07 patch. The game is still mega-awesome, even with the bugs, so we’ve forgiven them for it.  Sorry…

As noted here, there can be a lack of coordination between you and your horse Roach when it comes to summoning him.  Like Tycho, I admit to bossing my horse around all the time in The Witcher: Wild Hunt; also, to be honest about it? It’s not always Roach’s fault.  I will insist on summoning my horse and then running away from him, because I want to get to the objective and I’m caught up in the moment of the chase.  Roach will still follow me; which shows some dedication and professionalism on his part. I should be more grateful for that.

Telling you ahead of time and with some specificity that there’s going to be a bunch of free DLC, then releasing it regularly, seems to work pretty well.  It’s not earth-shattering stuff (armor sets and new missions and some cosmetic stuff), but it makes you feel like the company’s paying attention to the game, and isn’t sourly wishing that you’d stop playing it and buy one of their new games.  I also don’t mind the prospect of paying for meatier DLC later, this way. Mostly because I’m more likely to believe that it will be meatier.

Because MY readers are awesome. 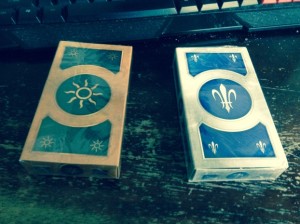 Please note, by the way, that the only way you can get these decks is from the Witcher Wild Hunt Xbox One Collector’s Edition.  Just the decks are going for triple digits on Amazon, which means that my readers are far more awesome than I deserve.

PS: As for the decks themselves: these are obviously Nilfgaardian / Northern Realm decks, with enough cards to play but none of the Universal Hero cards that you can get in game (I think).  Still, it’s a viable card game that you’re seeing there; I think that somebody could make some money off of this.

Gwent, for those wondering, is the game of chance that you play in The Witcher: Wild Hunt – Collector’s Edition – Xbox One (there’s a reason why I put up the Xbox One link: keep reading).  It’s basically a digital CCG that is simultaneously absurdly anachronistic and sweating-blood engrossing.  Which is why Tycho at Penny Arcade is going nuts over it; and why he wrote this:

I was going to say that, unlike many digital card games – ones that play with the mutable data of the cards themselves, or “summon” cards from a superset you don’t own – there’s no reason why this game couldn’t be played on a table.  Except we know it can be, because the Xbox One version I never considered for a fraction of a second includes physical decks in its collector’s edition.

Indeed, there is currently one – one – available on Amazon right now (The Witcher 3: Wild Hunt *2 Gwent Card Decks* from Collectors Edition Xbox Version), and if I had eighty bucks to throw at it I would.  They absolutely must sell these decks.  Absolutely.

Witcher: Wild Hunt is a vicious time-suck.  It just eats ALL the time.  You have been warned.

The machine that I bought specifically for The Witcher: Wild Hunt is working fine and the game play is nice and smooth. I still need to get a handle on crafting, and of course relearning the keyboard commands is always awkward. I figure that once I do I can crank the difficulty above Pathetically needs his hand held.  So: so far, I’m enjoying the game.

PS: Some people apparently hate the keyboard bindings and/or think that it’s a console game imperfectly adapted for a keyboard.  I have no idea if those are legitimate gripes, or just people complaining like people do on the Internet. :shrug: I’m having fun, at least. 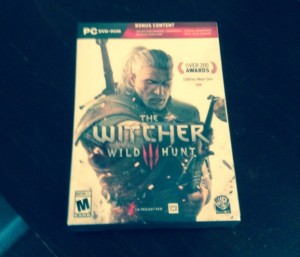 Mind you, gotta install it first.