The sky in some parts of the Pacific coast went past ‘grim’ and are now ‘science fiction horror movie.’ The American Red Cross will let you donate directly to wildfire relief, but if you have an alternate charity in mind, don’t mind me. Also: tack on some prayers tonight. Every little bit helps.

Via Constant Reader BJM here we see something that is… well. It’s terrifying, despite the fact that nobody visibly got hurt and nobody visibly died. I would personally have been reeking of unapologetic fear-sweat by the end of the first minute:

It is literally like something out of a video game. No, seriously, there’s a place in The Secret World MMO that looks a lot like this. Fun in a game; not so much fun in real life.

If you drink wines from the Napa Valley, savor last year’s crop. You might be waiting a bit for the next one: “Two wildfires north of San Francisco forced thousands of people to flee their homes and prompted Gov. Jerry Brown to declare a state of emergency on Sunday, continuing a drought-fueled fire season that could be the worst the American West has ever endured.” This is happening in the Napa Valley, you see – which means that the grape harvest is likely to be affected. Or burnt to the ground. END_OF_DOCUMENT_TOKEN_TO_BE_REPLACED

Yes.  You are shocked.

Very quickly, and to get this out of the way: the Online Left is babbling about supposedly-cut Texas firefighting budgets, mostly because they lack the research skills – or possibly, the native intelligence – to tell the difference between a $109 million Forest Service/Wildfire Fighting budget in 2010/2011, and a $196 million Forest Service/Wildfire Fighting budget for 2012/2013 (the 2012 fiscal year started at the beginning of this month). Fortunately, Battleswarm Blog can both think and do research – as seen here and here – which means that I don’t have to do any of the heavy lifting this time. Bottom line: never, ever stop just because you got the answer that you wanted.

[UPDATE: Via WILLisms, via @bdomenech, comes another reading error from the netroots.  Tthat some of the n-dimensional geniuses over on that side of the blogosphere looked at last year’s Forest Service budget and inexplicably failed to notice that it included a one-time new equipment allocation: which caused them to mistake this year’s budget as a reduction.  What makes it particularly funny is that the allocation was due to stimulus funds… which meant that in their haste to go negative, the netroots completely messed up the opportunity to make a positive argument about their policy positions.  And they wonder why nobody respects them…]

Just to make it clear precisely what we’re talking about, here: it’s not good.  25,000 acres burned so far, and the state is apparently as dry as a bone right now, thanks to a drought.  Let me show you the extent of the problem: 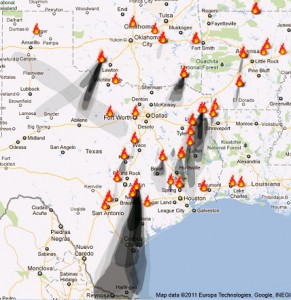 That picture is taken from Weather Underground’s WunderMap (as of roughly 10 PM EDT, September 5, 2011*).  The red flames represent fires, obviously: the dark smudges represent smoke cover.  Just in case the picture isn’t loading for you on your particular platform, let me sum it up for you: A LARGE PORTION OF CENTRAL AND EAST TEXAS IS ON FIRE RIGHT NOW.

I understand that there are people trying to politicize this situation, for their own purposes. I invite all of them to shut up and instead do something useful, like send their readers or listeners over to the American Red Cross.

*Another map can be found here, courtesy of @bdomenech.

I still haven’t made up my mind on this. Compare:

WASHINGTON (AP) – In response to reports of deaths and widespread property damage allegedly caused by so-called “wildfires” in California, President Obama said that he wanted to the let the more moderate and peace-loving flames know that “America is willing to negotiate without pre-conditions”.

It is a very close match in basic theme – if not in tone – but balancing that is that the joke is obvious. I’m going to give the benefit of the doubt on this one, but I can see why others won’t.

PS: “Nothing funny about this Presidency” my eye.