Not that I am pointing any fingers, specifically, towards anybody out there who may or may not be rattling a tip jar.  I will however note that supporting my Patreon at least gives you stuff.  Stuff that you would like, if you like gaming material and science fiction and fantasy and the odd bit of horror.

So if you feel like you want to give money away to people who just come out and ask it from you on the Internet, and you’re not giving it away to charity, then give it to me.  You will get more for your (literal) dollar, because you will get something for your dollar.  That’s… not always going to be the case, otherwise. 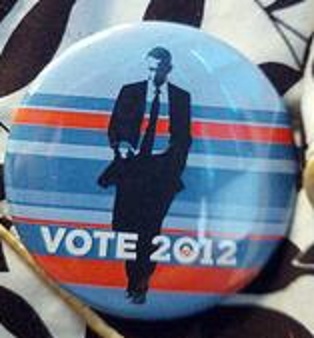 END_OF_DOCUMENT_TOKEN_TO_BE_REPLACED

Having a moment of semi-honesty.  Apparently, we don’t elect ‘leaders’ – mind the sudden chill, there – to create jobs:

(H/T: Hot Air) I say ‘semi-honesty’ because it’s somewhat more accurate to say that empirical evidence over the last three years suggests that nobody should realistically expect that electing Democrats will create jobs.  But that is a somewhat complex concept, with several hard words in it – and Wasserman Schultz was picked for DNC chair more for her ability to snarl on cue than for her level of cognitive development.  I mean, I’m sure that she has some – but nobody’s exactly calling Debbie in to double-check the math on that neutrino thing, if you know what I mean…

Via @SissyLewis comes this question from Salon:

A: It’s because they do stupid [expletive deleted] like this! 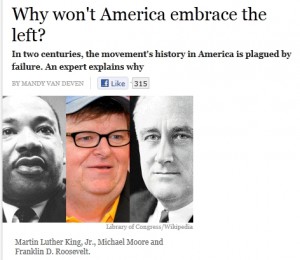 I mean, my wife’s a lot less political than me – and her first reaction there was One of these things is not like the others.

The Daily Caller has the details*:

Here’s how the logic works (according to World Net Daily’s Joe Kovacs): “While the Constitution does not define ‘natural-born citizen,’ there is strong evidence that the Founding Fathers understood it to mean someone born of two American citizens.”

Kovacs (and he is not alone) goes on to reason that Rubio’s “eligibility is in doubt” because — though his parents were legal U.S. residents when he was born — they were not yet naturalized citizens.

END_OF_DOCUMENT_TOKEN_TO_BE_REPLACED

Ever get the feeling that these people are starting to run out of arguments?

It may not rank as the most compelling reason to curb greenhouse gases, but reducing our emissions might just save humanity from a pre-emptive alien attack, scientists claim.

Watching from afar, extraterrestrial beings might view changes in Earth’s atmosphere as symptomatic of a civilisation growing out of control – and take drastic action to keep us from becoming a more serious threat, the researchers explain.

Note that the people that I’m really sneering at are the people at The Guardian who somewhat tortured what was a moderately innocuous paper on the range of First Contact scenarios into a ZOMG STOP RELEASING CARBON DIOXIDE OR THE ZETA RETICULANS WILL COME AND ANALLY PROBE OUR BRAINS.

No, that isn’t actually a non-sequitur: I have it on excellent authority that the anterior region of the body is indeed where the average Guardian employee keeps his or her cerebral cortex.

If you’re wondering what that is, it’s the D/R/I breakdown of the AP poll of adults that ‘shows’ the President at a 60% approval level.  Hot Air doesn’t say, but I will: that’s roughly the same ratio that this AP poll was reporting in May of 2009… which is to say, before Barack Obama and the Democrats put on big hob-nailed boots and started jumping up and down on their collective reputation.

PS: And in the field of ‘burying the lede’… the actual headline of that AP article should have been “Former President George W Bush hits 50% approval rating in ridiculously Dem-heavy poll.”  Put another way: 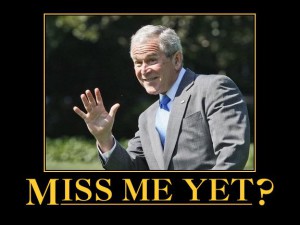 Yes, I know.  The goggles do nothing.

Marvel, oh my droogies, at the caliber of establishment that the Brave Sir Robins (otherwise known as “Democratic Wisconsin state senators trying to avoid a vote on ending collective bargaining”) hid out at, rather than do their job.  I give you… the Tilted Kilt: 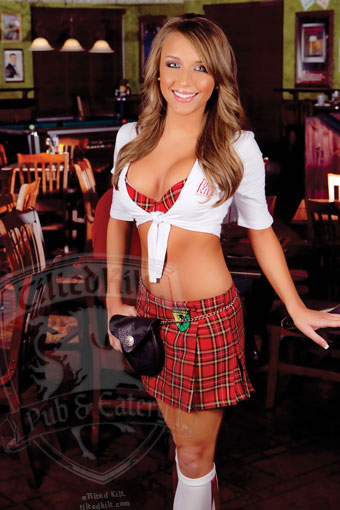 If you think that I’m going to pretend that I wouldn’t have a beer and something fried – AND NON-SCOTTISH – at such a fine, fine residence myself, well… I’m not.  I’d probably cheerfully eat there, if I needed to, or really, wanted to.  But I wouldn’t be doing it on the taxpayer’s dime, either – and if I’m there in Illinois when I should be in Wisconsin dealing with the fact that elections have consequences, then I’m doing it on the taxpayer’s dime whether or not I’m using my personal credit card to leave Fiona MacSchoolgirloutfit an outrageous tip that will not, in fact, result in her helping toss my caber*.

And remember this well, ye Wisconsin Republican state Senators.  That is where your ‘colleagues’ were while you were carefully avoiding letting your heads, or those of your staffers, be in a clear field of fire today.

Via The PJ Tatler, via Instapundit.

*Not that I would attempt to enlist such help, being married and all.

At least, on our side.  We talk about you like you are a schmuck – which, while rude, also has no relationship to ‘dog’ whatsoever*.

“Some powerful interests that have been setting the agenda in Washington for a long time, and they’re not always happy with me. They talk about me like a dog.”

However, I would find it very believable that Democratic powerful interests may in point of fact speak of you in such a fashion.  Long tradition in your party leadership, and all that.

*Not to plumb the depths of Yiddish – a language which has almost as checkered and crooked a past as English does – but ‘schmuck’ usually carries the connotation of ‘penis’ (or, more vulgarly, ‘dick’).  Of course, several Yiddish words of roughly equivalent meaning have been known to creep into the language – thus making it tricky to determine which one is best for the job – but that’s part of Yiddish’s charm: it taps into all the languages that Yiddish speakers picked up while they were being kicked around Europe and being put on various enemies’ lists by clinical paranoids.

You simply have to be resigned to that.