There are days when I feel sorry for the African-American blogging sub-demographic of the Online Left.  No, really, there are days that I do.  It’s a hell of a life that they’ve got for themselves: they’re trapped by their ideology into supporting a political movement that has been an unmitigated disaster for African-Americans; and they’re trapped by their skin color into toiling away for a political party that has a strict and fairly cruel internal racial quota system.  To put it more simply: this speech*?

Yeah, that speech is part of a certain type of AA progressive activist’s internal monologue every morning. Only it’s accusing them, because they’re part of the problem and they know it.  Malcolm X would be the first person to ask them what the HELL they’re doing, supporting a party that wants to throw minority kids out of rich DC white people’s schools; and while I’m confident that Malcolm X would have equally incendiary things to say about my party that really isn’t the issue.  The issue is those poor SOBs, and their continuing selling-out**.  Then again, the aforementioned activists resolve all of this via applied hysteria to safe targets – preferably, black conservatives, although anybody from the VRWC will do in a pinch – so my sympathy is typically muted.

All of which is just to make sure that it’s understood that my linking and showing this picture: 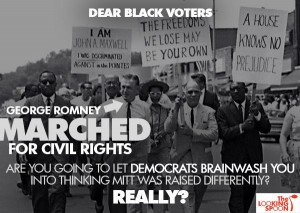 …should be taken as a rebuke to those aforementioned African-American progressive activists.  Because they have done something worse than allowing themselves to have been brainwashed; they instead participate in the brainwashing of others.  And they’re wrong.

*Not a bad movie, except that the last ten minutes or so was too talking-heady, if that makes any sense.

**And, really: that they’re doing it for Barack Obama makes this entire thing an exercise in Dark Humor.  Which the aforementioned activists know.  And it burns them inside.