Via the Foundry comes these two word clouds of yesterday’s debate: 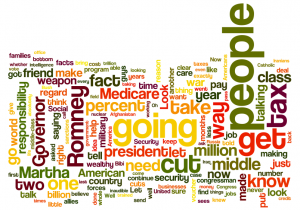 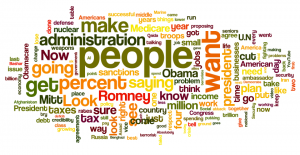 …and here’s an interesting game to play: quick, which one is which?

Analyzing word clouds is always a tricky business – it has a certain flavor of entrails-reading to me – but I think that it’s at least noteworthy that Biden (the first word cloud) avoided saying the words ‘Obama’ or ‘Obamacare,’ but made darn sure that the world knew that he knew the name ‘Martha.’  Ryan, on the other hand… actually, there’s nothing equally harsh to say about Ryan’s word cloud; and yes, it is harsh to point out that the Vice President was visibly afraid to bring up his President or his President’s signature ‘accomplishment’ by name, while being perfectly happy to continually browbeat moderator Martha Raddatz*.

We’ll let the long-term effects sort themselves out, but here’s the thing.  Even Biden’s most enthusiastic supporters are saying that his goal last night was to stop the bleeding among the Democratic base.  Ryan didn’t have the equivalent problem; the base is behind the Romney-Ryan ticket, not least because Romney tapped Ryan for the VP slot.  What Ryan did yesterday was rack up some more undecided voters.  So I’m pretty happy how it all turned out: sure, I’d like a rout of the Democrats in three or so weeks – but I’ll take a solid win, instead.

*He also tried to browbeat Ryan.  Tell me: do you think Joe Biden succeeded?

I don’t think that Joe Biden succeeded.  Interesting contrast: Joe Biden’s closing remarks were to the moderator; Ryan talked to the American people.  That tells you everything that you need to know about the debate priorities of both campaigns.