Was thinking about this in relation to this Tweet – and note that my major quibble with it is the use of the words ‘fetishization of,’ rather than ‘pandering to.’  It’s true: Hollywood over-samples young people when making movies, and they’re unlikely to stop.  And here, courtesy of the MPAA’s 2014 Theatrical Statistics Study, is why: 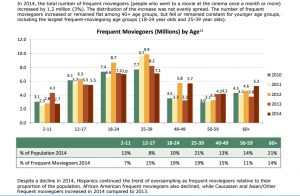 To break it down by age: according to those statistics, 52% of the population of the USA/Canada is under the age of 40, but under-40s make up 60% of USA/Canada moviegoers.  12-to-24 year olds make up 18% of the general population, and 34% of moviegoers.  There has been a rise in older moviegoers (40+, in this context*) over the last few years, but it’s still a young person’s market.

Now, I don’t know whether this is a self-fulfilling prophecy or just a quirk of the way human brains are wired when it comes to movies.  I’m sure that you could make arguments either way.  What I do know is that it’s not that hard to get somebody my age to go see a popcorn flick that’s been directed and filmed with younger moviegoers in mind. So I’m pretty much expecting a diet that’s going to be heavily weighted in favor of popcorn flicks.  And that diet won’t change much, any time soon.

On the bright side: Arrival looks like it’s going to be a hit, so maybe Hollywood can give more of that kind of flicks a shot.

*Yeah, I’m not personally thrilled about having to call people above 40 ‘old,’ either.