If nothing else, social media teaches us this: not everybody should be on social media. Case in point…

Drought or no drought, Steve Yuhas resents the idea that it is somehow shameful to be a water hog. If you can pay for it, he argues, you should get your water.

People “should not be forced to live on property with brown lawns, golf on brown courses or apologize for wanting their gardens to be beautiful,” Yuhas fumed recently on social media. “We pay significant property taxes based on where we live,” he added in an interview. “And, no, we’re not all equal when it comes to water.”

END_OF_DOCUMENT_TOKEN_TO_BE_REPLACED 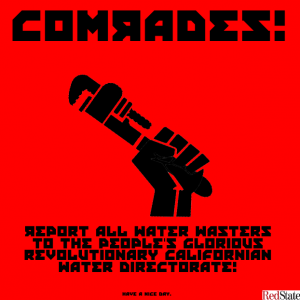 If there’s a drought next year, some of these estates may get rocks thrown at them.

Experts predict California reservoirs have less than a year’s worth of drinking water left. An emergency law passed last week forces local cities to conserve water immediately. The Las Virgenes Municipal Water District, which supplies many of these elite enclaves north of Los Angeles, will have four weeks starting next month to cut water use by a staggering 36 percent. But the mandate is toothless, with the maximum fine a paltry $100.

“We’re right up there with Beverly Hills,” said one official who estimates 70 percent of the district’s water is going to the lawn maintenance of about 100 manicured estates. “And that means we have to get the A-listers on the bus.”

END_OF_DOCUMENT_TOKEN_TO_BE_REPLACED

I cannot possibly see how this could end badly. “This” being a “smart meter” that gets installed on suspected “water wasters” (now there’s a phrase that didn’t take long to spring up, huh?) in – for now – Long Beach, California.  Once installed, it tracks for illegal water use – I cannot believe that I had to write that phrase in reference to an American state – and if it sees some it then finks out the treacherous kulak to the water department. All of this is done via the ‘cloud,’ because apparently this story is designed to be extra-painful to digital libertarians*. END_OF_DOCUMENT_TOKEN_TO_BE_REPLACED