The young boy’s desperately silent scream for rescue will haunt your dreams.

Yeah, sure, using that term will save at-risk Democrats in swing seats and states.

Now, it’s important to note here that HHS Secretary Sebelius was being inarticulate and stupidly insensitive here, not threatening. She didn’t mean to evoke the Cold War era specter of Communist concentration camps where enemies of the State were systematically tortured into reflexively supporting whatever Dear Leader was in power that year, or Soviet-era ‘mental hospitals’ where dissidence was ‘treated’ as a medical disease. The Democrats aren’t setting up detention centers for everybody who opposes Obamacare: for one thing, you can’t actually lock up a majority of a country. But the Democrats are nonetheless tired and angry about how Obamacare continues to be rejected by the voting populace – particularly the voting populace who will be at the polls in November – and sometimes people like Sebelius slip up. Use of a term like ‘reeducation’ indicates that the user of it has decided that there’s nothing wrong with his or her argument; the flaw lies in whoever is not being persuaded by it. So there’s no need to fix the argument itself, obviously.

If I don’t seem overly worried about this, it’s because I’ve seen the method by which they plan to magically change the minds of voters everywhere! Yes, they plan to do it through the power of instructional videos. Their first example is below:

…Oops. Don’t know how that one got in there. Here’s the actual video, designed with micrometer-level precision to hit every possible demographic except white, Caucasian males*:

…yeah, maybe we should go back with The Stepford Wives one.

As Mary Katharine Ham put it: “Cult of competence, I believe they were once called.” NOT BY ME! I knew that these people were congenital goofballs when they had trouble finding a Cabinet whose members all paid their taxes.

PS: Mind you, Kathleen Sebelius is the reason why we’re going to flip the Kansas governorship this year, which will probably mean that we flip at least one House seat there, to. The Obama administration: wrecking once-promising Democratic party careers since 2008.

*No, really! They had one, but then they airbrushed him out of the final version. Compare the final collective: 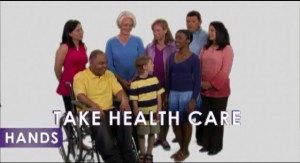 …with the original screenshot that they had for the video: 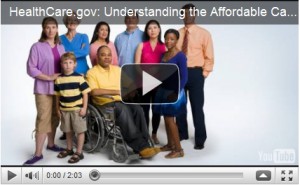 There’s a metaphor, there. I can tell.

One thought on “Sebelius counsels… ‘Reeducation’ for Obamacare.”