You know, in some ways I’m going to miss this miserable ignoramus, once he’s gone: Phil Hare’s such a marvelous chew toy, and the ones that I had expected to be savaging this season were unexpectedly unsatisfying.  Alan Grayson?  Too slimy; I wanted to take a shower every time I saw him in the news.  Carol Shea-Porter?  The room-temperature IQ problem made it kind of unsporting.  Okinawa Jack Murtha?  Died on me.  But Hare (and Russ Carnahan, who I will also kind of miss smacking around) has been reliably bad since he first hove into view.

His latest goof-up?  Claiming the endorsement of the Illinois Corn Grower’s Association, only to have the ICGA explicitly contradict him in public. Needless to say, the Bobby Schilling campaign – which will not miss Hare in any way, shape or form – was happy to point this out… and to point out that people don’t like career politicians for a reason.

The Schilling campaign also has a van, of which they are very pleased: 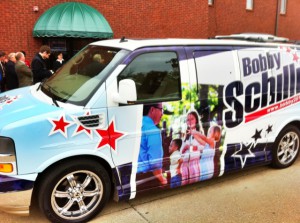 I mention this because, again, they are very pleased with the van.  And with their last campaign ad, which can be seen under the fold.