Put a gun to my head, as of this moment this is what the Senate map looks like for us in November. 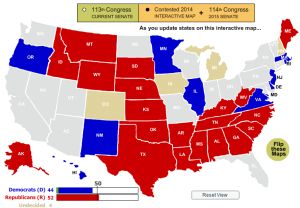 (Map via 270 To Win) Pickups in AK, AR, LA (hardest to pick up), MT, NC, SD, WV; we retain GA (close) and KY (not close).  CO, IA (second-hardest to justify), MI, and now NH (hardest to justify, and I am indulging myself there) up for grabs. And I am still keeping an eye on Oregon. Conditions aren’t quite ripe, there, but it could be the sleeper of the season.Two things pop out: one, the battlespace has almost shifted to the point where we can afford to lose one of those states and still count on having a majority. Right now we’re not precisely there: LA & NC are not locked down, merely good bets. But if things keep moving along the way that they are, pretty soon we’ll be talking about how to have enough of a margin for 2016. This is going to have an effect on… certain candidates’ rhetoric, so be ready for that.

Two: right now the Democrats are not exactly complaisant about the situation so much as they are committed to bad ways of handling it.  Their current leadership is not up to the task of countering the American people’s genuinely hostile reaction to their signature policy (mostly because the Democratic leadership is perhaps incapable of admitting that the hostility is genuine). The Democrats lost a lot of territory in 2010.  They largely failed to get it back in 2012, which was a year that was theoretically promising for them. If they lose more territory in 2014 – and that’s what is most likely to happen – even a good year in 2016 won’t be enough to put them back to 2008 levels.

I bring this up because there are a lot of Democrats on the state level that would like to go to Washington, or at least control their own state legislatures and governorships. Right now they’re not getting many opportunities to do that, and it’s very much due to their leadership.  And they know it.  Pain is a remarkable teacher; eventually enough of them will get the message, which is to change the message and remove the idiots that are currently in charge. We can’t expect them to stay dumb forever. If only because they’re running out of leadership cadre members that are still in office.

So that’s my take.