(Via Hot Air) I was struck by something when I read this: “Neither Obama nor Clinton has spoken critically of a $15-an-hour federal minimum. But recent comments from the candidate, and from officials in Obama’s administration, suggest Clinton and Obama may be worried that such a large increase could prove too much for some parts of the country to bear.” To wit, that this may be one situation where the Democratic establishment may not actually understand the motivations of its own liberal base. For that matter, possibly the liberal base doesn’t really actively understand said motivations either.

The argument against a federal minimum wage as seen in the Washington Post (and in Hot Air, for that matter) is fairly simple: cost of living in the United States varies noticeably. Let’s do an experiment: pretend that you’re a barista in NYC. You make minimum wage (currently $8.25/hour, or about $17,500/year). You decide that you’re tired of living in NYC, and you move to Dallas, TX. Minimum wage there is $7.25/hour, or $14,500/year).  Bad call, right? …Not really.  According to this site, somebody making $14,500/year in NYC would only have to make $7,731/year to have the same standard of living in Dallas. It’s just ridiculously cheaper to live there, especially when housing is involved, and that more than makes up for the relatively trivial loss of salary. 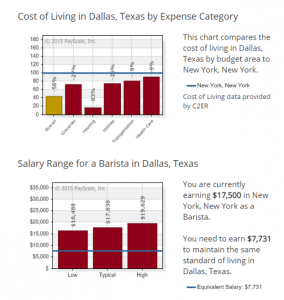 And now you know why Texas got four extra Electoral Votes in the last Presidential election, and why New York lost two. And possibly now you know why some elements on the Left are so desperate to inflict a $15 minimum wage on the entire country: because if you think that Dallas will stay more than half as cheap as NYC to live in with a sudden hike in the minimum wage to $15/hour, you’re probably working for a Lefty economic think-tank. What will actually happen is that there would be a slight amount of inflation in NYC, and either a serious amount of local inflation in Dallas (because that’s what happens when currency suddenly gets tossed into a local economy); or the Dallas labor market stagnates (or even sheds jobs) because local companies can’t compensate in time; or (this would be my guess) a combination of the two.  In any particular case, Dallas stops looking like such an attractive alternative to NYC.

Is that the conscious intent of the Left? Almost certainly not.  But it might very well be their instinctive reaction to the (to them) ongoing problem that their bi-coastal enclaves are shedding population – and thus, political influence. More simply put: if you make every place just the same, people probably won’t bother moving. Makes things more… predictable.

2 thoughts on “A federal minimum wage should be anathema to anybody who likes local city life.”