As in, whether you believe in it.  Background: Time Magazine’s done one of those admittedly heavily unscientific quizzes that promises to peg your ideology with no more than twelve, count ’em, twelve questions.  Anyway, it’s going around, and I took it… to discover that I’m 63% liberal.  Which is weird: sure, I’m a squishy moderate and everything, but still.

Then I realized that I had screwed up this question:

I wish the world did not have nations or borders and we were all part of one big group.

The answer, of course, was supposed to be Hell, no*.  I firmly take the position that the United States of America makes a perfect world hegemon because none of us WANT the goram job; we just want to keep all those wild-eyed enthusiasts out there from getting the job – and in the process, presuming to think that they can tell us what to do. That never ends well**.

Anyway, this was the result with the screwed-up answer: 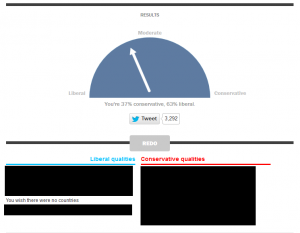 And this is the one with the ‘right’ answer: 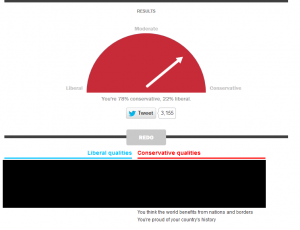 OK, 78% conservative makes a lot more sense.  Amusing that even Time magazine admits that the Left just doesn’t believe in American exceptionalism any more, though…

*Well, the answer is supposed to be Yes, but only if everybody and everywhere was just like America. They didn’t have that answer, though.

**For our enemies. As some of them might even admit, if only we had kept them alive afterwards so that they could offer testimonials.

14 thoughts on “So… according to Time’s liberal/conservative quiz, it all comes down to American exceptionalism.”