Barack Obama was literally too afraid to show his face after vetoing Keystone.

As expected: the President has decided to side with environmentalists over blue-collar unions (and the rest of the country, mind you) by vetoing the bipartisan Keystone Pipeline bill. But did Barack Obama at least do so publicly, to great fanfare? Since this is so important, after all? Of course he didn’t. That would imply moral courage. Nah, Barack Obama did so with his head down and as timidly as he dared – and these days, Barack Obama can dare to be pretty darn timid.

“The presidential power to veto legislation is one I take seriously,” Obama said in a brief notice delivered to the Senate. “But I also take seriously my responsibility to the American people.”

Obama vetoed the bill in private with no fanfare, in contrast to the televised ceremony Republican leaders staged earlier this month when they signed the bill and sent it to the president. House Speaker John Boehner, R-Ohio, said Republicans were “not even close” to giving up the fight and derided the veto as a “national embarrassment.”

A national embarrassment, indeed.  One that extends all the way to even the DNC.  Marvel at their ‘celebration’ of this event: 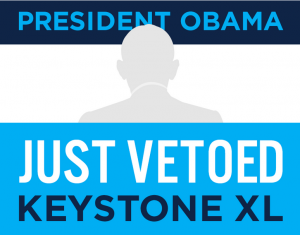 I mean, geez. When a politician’s own pet agitprop office doesn’t dare have Barack Obama look you in the eyes…