There’s just something about it.

I don't think anyone, regardless of party, can dispute that this is the single best photo of the Obama years pic.twitter.com/68AIEA35FB

No, seriously, I’m not trying to make a joke here.  Go and look at this picture. 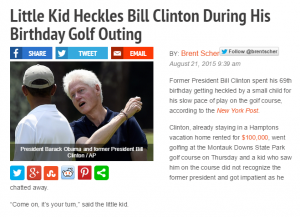 END_OF_DOCUMENT_TOKEN_TO_BE_REPLACED

Diet or no: he’s got that hardcore vegan ‘obsessively gaunt’ look down pat, to be sure.

So the Democrats should start trying to come up with an answer now.

"Does [Hillary] think her husband was somehow a bigot" for signing RFRA? – @tedcruz

It may take them a while.

I say that with nothing but respect in my voice: it was masterfully done.  In fact, it was so masterfully done that I originally thought it came from the Washington Free Beacon, not the Federalist.  And that’s also meant as a compliment: 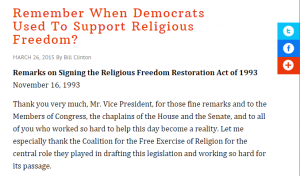 I especially love the way that they’re essentially daring Bill Clinton to complain about this one. Any official response to it at all will only highlight the fact that Bill Clinton had a remarkably comprehensive bunch of nice things to say about the RFRA; and that Hillary Clinton is almost certainly going to be campaigning on being… the anti-Bill Clinton, I guess.  And not in a good way.  As I said, masterful trolling, here.

I have very little to say about the Monica Lewinsky matter, given that I was on the other side at the time, but this is definitely cheeky. I do not say this to disapprove; in fact, I think that it’s hysterical, and one of the things that art is for. But the Clintons never forgive a slight, and this is one heck of one:

Q: Who did you find was the hardest to capture?

[Artist Nelson Shanks] Clinton was hard. I’ll tell you why. The reality is he’s probably the most famous liar of all time. He and his administration did some very good things, of course, but I could never get this Monica thing completely out of my mind and it is subtly incorporated in the painting.

If you look at the left-hand side of it there’s a mantle in the Oval Office and I put a shadow coming into the painting and it does two things. It actually literally represents a shadow from a blue dress that I had on a mannequin, that I had there while I was painting it, but not when he was there. It is also a bit of a metaphor in that it represents a shadow on the office he held, or on him.

…Either Mr. Shanks is even more serenely confident than I am that HRC will not be the next President of the United States, or he simply doesn’t care if he gets audited. I’ll accept either answer. Respect it, too.

Virginia Roberts, who’s accused Epstein of turning her into a “sex slave” at age 17 and forcing her to sleep with his powerful friends, claimed Clinton stayed in one of the many villas on Epstein’s US Virgin Islands estate — where group sex was a “regular occurrence.”

END_OF_DOCUMENT_TOKEN_TO_BE_REPLACED

It is fascinating to think that this might be what torpedoes a Hillary Clinton presidential run.

Hillary Clinton is “furious” at husband Bill Clinton, according to Washington insiders, after his name came up in the latest sex scandal involving his disgraced former pal ­Jeffrey Epstein.

Sources at the funeral of Mario Cuomo also said they saw a peevish-looking Hillary angrily “storm” past the former president after he dutifully waited for her by the door of St. Ignatius Loyola Church.

But I guess that anything will do, if you’re a Democrat who really, really doesn’t want Hillary Clinton to win. How many of those are there? Guess we’ll find out, huh?

I don’t know who is brought down more by being seen with the other, frankly. Perhaps this is a Magical Healing Power Of ‘And’ moment…

OF COURSE. RT@TigerWoods My Sincere thanks to billclinton for coming to the #dbchampionship party. pic.twitter.com/fXfuQeb1Rn

(Via @PJMedia_com) Oh, sure, Bill Clinton also posed with a couple of prostitutes, but they were legal ones from Nevada. This is easily more problematical: