Gallup is being a bit, ah, antiseptic on this story: “President Barack Obama’s job approval rating among white non-college graduates is at 27% so far in 2014, 14 percentage points lower than among white college graduates. This is the largest yearly gap between these two groups since Obama took office.”  I say ‘antiseptic’ because it should be spelled out more that Obama’s popularity with college educated white voters dropped remarkably in 2010, and has been slowly degrading ever since; but at the same time Obama’s support among working class whites not only dropped similarly in 2010, it did so again after 2012. In other words, Obama seems to have found a floor when it comes to white college graduate voters; white working class ones, not so much.

I mention all of this solely for one reason: in the run-up to 2016 you are going to hear a lot of college educated white Democratic activists solemnly inform you that [INSERT DEMOCRATIC PARTY CANDIDATE HERE] will be able to craft a populist message that will resonate with working class voters.  They are also going to inform you, just as solemnly, that Barack Obama will not be a drag on the ticket.  This is not a case where both of these things cannot be true; it is more a case that neither is true, but the former is slightly less unbelievable than the latter.  It will be interesting to see which Democratic pundits will be able to comprehend this.

This AoSHQ piece from a couple of days ago actually makes me a bit chipper.  Why? Because of that Gallup graph.

You see, it’s an interesting thing: since 2000, Gallup has been polling on the question on whether or not Americans think that the federal government has the responsibility to ensure health care coverage. In 2009, the breakdown for that was 54/41; and today the number is… 56/42. Well, more accurately, it’s 42/56. Because back when Barack Obama took office a majority of the American people were happy to have the government involved in ensuring health care access; and now that the government has a majority of the American people would like the government to stop now, please.

Excuse me while I give this non-integral and unsecured support beam for the Democratic party base’s sense of self a good, hearty kicking:

Americans’ views of the Democratic and Republican parties are now similar, mainly because of their more positive ratings of the GOP.

Oh, Gallup.  Tell the truth: you guys just enjoy watching the chaos that results when you toss a poll like this into the room, don’t you? END_OF_DOCUMENT_TOKEN_TO_BE_REPLACED 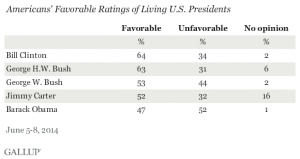 There’s no real reason to bring this up, except of course that doing this incredibly torques off all of those folks on the Left who based their own sense of self on their loathing of George W Bush. That’s bad mojo, my friends: bad, bad mojo. And it’s something that my own ideological compatriots will need to watch out for, once the current guy is out of office: Barack Obama’s image will be rehabilitated in the public eye. It almost always happens.

So, those guys on the Left? Don’t be like those guys.

END_OF_DOCUMENT_TOKEN_TO_BE_REPLACED

Not even a little.

Romney currently leads Obama 52% to 45% among voters who say they have already cast their ballots. However, that is comparable to Romney’s 51% to 46% lead among all likely voters in Gallup’s Oct. 22-28 tracking polling. At the same time, the race is tied at 49% among those who have not yet voted but still intend to vote early, suggesting these voters could cause the race to tighten. However, Romney leads 51% to 45% among the much larger group of voters who plan to vote on Election Day, Nov. 6.

Gallup’s showing that 15% of the electorate has already voted; 33% currently say that they have already voted or plan to; and estimate that 36% of the electorate will be early voting this year.  In case you were wondering, at this point in 2008 Barack Obama was winning all three categories in the previous paragraph by comfortable margins: 53/43 among already-voted, 54/40 among plan-to-vote-early, 50/44 among vote-on-Election-Day.  That link’s via Dave Weigel (who also helpfully offers up the Obama campaign’s rebuttal of state polls without noting that we are constantly seeing inflated reports of early voting on the state level*); the whole thing’s via Jim Geraghty’s Daily Jolt (alas, NRO is down right now, so no direct link). END_OF_DOCUMENT_TOKEN_TO_BE_REPLACED

Look at this title and subtitle: great news for Democrats, right?

Composition of electorate by race, age, gender essentially the same

Yup, horrible news… wait a second.  Notice what’s missing from that subtitle?  As in, what rather important category?  For an election?  You know… political affiliation?

Yeah, well, there’s a reason for that. 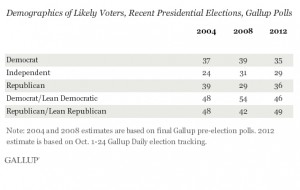 I take some pleasure in being an aggravating so-and-so to the Online Left, but I have to say: this is epic trolling by Gallup.  I would like to think that I could come up with something this contemptuously brilliant, but I am forced to admit that I am unsure that I could pull it off.

They’re ahead on a poll of registered voters. Which, as Gallup itself concedes, “when Gallup has found congressional voting preferences close to even among registered voters, that is typically a better sign for the Republican Party, given usual Republican advantages in voter turnout.”  But let’s pretend for a moment that the above is a likely voter pool.  Gallup is touting the accuracy of its generic balloting in Congressional elections, so let’s take a look at these numbers for a second:

Those are the off-year Presidential election results, back to 1990 (data is spotty past that point).  ‘Gallup’ is the difference in the Republican & Democratic vote in their final survey; ‘election’ is the final spread in the two-party vote; …and ‘+/-‘ shows how many seats the Republicans actually gained or lost in that time period*.  As is fairly obvious: when the Republicans do great on the generic Congressional ballot they do fantastic.  When the Democrats do great on the generic they do… well, not all that great, but reasonably well.  And when the numbers are about the same (which? …Nothing much happens.  Now, at this point a bunch of readers have probably forgotten about 2008, which was not an off-year Presidential election; but I did not.  There was a complication with regard to the fact that the 2012 has not yet switched to a likely voter model, but fortunately in 2008 Gallup reported both likely and registered voters, so we can look at the way things went:

‘Oct’ is the October 17, 2008 survey (44/51); ‘Final’ is the November 2, 2008 one (43/51).  As you can see there, it turns out that the significant gain of seats more or less reflects the distance between the Democrats and the Republicans at that point.  And that is why Gallup’s tie in the generic Congressional ballot doesn’t worry me; it’s essentially telling me that there won’t be much of a shift, if any.  Looking at 1998, which was the last time we had the first election after a dramatic flipping of the House to Republican hands… I could totally see the GOP losing five net seats this year.  Possibly even ten.

… And?  Right now there are 240 Republicans in Congress, and 190 Democrats (5 vacant seats).  Even assuming we lose every vacant seat election and another 10 besides, the 113th Congress will start with a 230/205 Republican/Democratic majority.  I don’t particularly want to lose those seats, of course; but we will still have a working majority.  Which is pretty much what everybody is expecting, even if they don’t particularly want to say so in public.

PS: If you’re wondering why I’m not taking into account Barack Obama’s coat-tails, oh, that’s easy: I don’t think that he’ll have any.  Largely by Barack Obama’s own conscious choice.

*Gallup did not provide that information; I pulled it from Wikipedia.