Well, look at this…

Emails we’ve seen show that between 2011 and 2013 the two were in contact on multiple occasions, sharing articles on topics including greater donor disclosure and Wisconsin’s recall elections. The emails indicate the two were also personal friends who met for dinner and kept in professional touch. “Are you available for the 25th?” Ms. Lerner wrote in January 2012. “If so, perhaps we could work two nights in a row.”

END_OF_DOCUMENT_TOKEN_TO_BE_REPLACED

ObamaCare customers who received the wrong tax form from the federal government this spring will not face penalties if they miss the April 15 deadline, officials announced Friday.

Anyone who have not yet been sent corrected tax forms and are “unable to file an accurate tax return” now have until Oct. 15 to file — as long as they request an extension.

The government did not say how many people will be given extra time, though officials said in late March that 80,000 people were still waiting on their corrected tax forms. A total of 800,000 people had mailed the wrong forms.

END_OF_DOCUMENT_TOKEN_TO_BE_REPLACED

Between 4.5 million and 7.5 million taxpayers received subsidies for insurance premiums when they signed up for coverage on Obamacare exchanges, federal officials said. These folks had to forecast their 2014 income when they applied. Those who underestimated their earnings either will receive smaller tax refunds or will owe the IRS money.

Some enrollees, however, had a change in circumstances — such as a raise, new job, marriage or baby — during the year that could affect their subsidy level. Obamacare enrollees were supposed to contact their exchange so it could revise their premium. Some people, however, did not know they had to notify the exchange or simply didn’t bother.

END_OF_DOCUMENT_TOKEN_TO_BE_REPLACED

You know, if I didn’t know better I’d think that there’s something fundamentally wrong with Obamacare.  But that’s just crazy talk, right? …Right:

Consumers who received too much in federal tax credits when buying insurance on the health law’s marketplaces last year got a reprieve of sorts from the Internal Revenue Service this week. Although they still have to repay some or all of the excess subsidies, the IRS won’t ding them with a late payment penalty if they don’t repay it by the April 15 tax deadline.

“They’re trying to make this work,” says Timothy Jost, a law professor at Washington and Lee University who’s an expert on the health law.

The problem for Democrats is not exactly this: “As many as 3.4 million people who received Obamacare subsidies may owe refunds to the federal government, according to an estimate by a tax preparation firm… H&R Block is estimating that as many as half of the 6.8 million people who received insurance premium subsidies under the Affordable Care Act benefited from subsidies that were too large, the Wall Street Journal reported Thursday.” Although it’s definitely going to be a problem: ‘several million people suddenly discovering that they now owe back taxes to the government over Obamacare’ is not exactly a good scenario, especially if you belong to the political party that set that scenario up in the first place. But it’s still not the worst thing for Democrats.

No, the problem for Democrats here is that this is going to happen every year. The system is more or less designed to assume that people would twiddle with their coverage on a regular basis: as plans changed, improved, or degraded the consumer would be obligated to follow suit, in order to keep the subsidy.  This sounds perfectly reasonable… if you’re not the one doing it.  But out in the real world?  Well, I’ve written about this before: END_OF_DOCUMENT_TOKEN_TO_BE_REPLACED 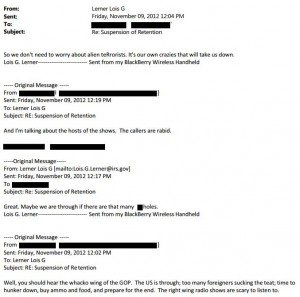 I absolutely encourage them:

The House on Wednesday approved legislation that would prohibit performance bonuses for senior executives at the Internal Revenue Service.

Rep. Paul Gosar’s (R-Ariz.) amendment to the fiscal 2015 Financial Services appropriations bill was approved on a 282-138 vote, with one member voting present.

END_OF_DOCUMENT_TOKEN_TO_BE_REPLACED

“We have seen a lot of unbelievable things in this investigation, but the fact that Lois Lerner attempted to initiate an apparently baseless IRS examination against a sitting Republican United States Senator is shocking,” said Camp.

Basically, what happened here was that Lerner got sent an invite meant for Sen. Grassley by mistake.  So she immediately started sniffing around for a way to make a federal case out of it, and got gently smacked down by a colleague more aware of the pesky reality that you actually have to wait for somebody to break the rules before you can investigate them for it.  Your tax dollars at work, folks: the IRS may not be able to follow the same document storage rules that they’ll enforce on the rest of us, but they’re absolutely proactive when it comes to trolling through your mail for a preemptive strike.

Sorry for getting that song stuck in your head, by the way.

Imagine, if you would, the following exchange:

IRS Agent: What you did here is suspicious.

IRS Agent: Really?  What are the relevant laws?

I want you to imagine what the IRS agent’s most likely response would be to that.  You can, right? It’s pretty easy. We all know just how much give there is when it comes to dealing with the tax man.