Haven’t changed that opinion since 2009, either.  Anyway, I came across a slightly despairing passage from 2011: in case you weren’t aware, golden bamboo is an invasive species in Maryland, because some idiots thought that it’d look awesome here right next to the native bamboo (which has the elementary politeness to regulate itself). The problem?

There are no known biological controls for bamboo, unless you count the Giant panda. Certain spider mites feed on bamboo leaves but they do not cause extensive damage. Pandas on the other hand, actively eat the leaves and tender shoots of bamboo, and in fact bamboo makes up 95% of their diet. Since adult pandas eat about 20-30 pounds of bamboo per day, a pair would make short work of an infested area. Pandas are however, notoriously scarce, with only about 1,000 found in the wilds of central China and another 200 or so in zoos throughout the world. So don’t look for anyone offering their services.

On the bright side, there may be a solution here: genetic engineering. If we could get our hands on enough panda DNA, we could bootleg the species and release it into the wild (after tweaking its collective suicide wish, slightly). Of course, once they eat all the bamboo they’re kind of stuck, but I figure that if we also make them tasty that would be a self-correcting problem. Certainly the coywolves wouldn’t object…

Wow. I have definite opinions about animals, huh?

It’s a lonely cause to advocate, to be sure.

Congratulations on your new panda cub, Washington! You’re prolonging the existence of a hopeless and wasteful species the world should’ve given up on long ago.

I understand the impulse. Some people find them cute. Pandas don’t have much of a habitat left in the wild, thanks to heedless human development. And zoos imagine they’re doing the right thing, pulling in some extra visitors while helping conservation efforts.

But the first test of a species’ worthiness for conservation should be some instinct for self-preservation. And pandas fail objectively.

END_OF_DOCUMENT_TOKEN_TO_BE_REPLACED

They mock us and our breeding programs: as one of my colleagues (I forget who) once sardonically noted, it’s impressive that the PRC was actually able to track down and present us with a gay panda* as a ‘gift.’

Hey, look, you know what I think that the alternative is.  Species-wide suicide wish.

…the sweet, sweet release of extinction.  Yup, we’re keeping the ones that we have at the National Zoo for another five years.

Seriously, that species wants to die. What do they have to do to make people understand that?

PS: This post may have been affected by a glass of Chocovine.  And by ‘glass’ I mean ‘tumbler over ice.’  What’s the alcohol content on this stuff, again? …14%?

…suggests SE Cupp (via Hot Air Headlines) with her tongue fully in cheek; after all, it’s evolution, ain’t it? – Besides, contra certain religious groups we don’t actually know why certain species go extinct and others do not*.

*Well, except for pandas.  I’ve long taken the position that that particular species just wants to die.

And the self-destructive spiral of an entire species continues.

The raccoons should stage an intervention.

(Via AoSHQ Headlines) I know that I’ve made some pointed comments about Ailuropoda melanoleuca’s collective will to live, but I never dared take it to the next step. Chris Packham, on the other hand…

Giant pandas should be allowed to die out as they are stuck in an ‘evolutionary cul-de-sac’, according to BBC presenter Chris Packham.

The conservationist, 48, said the species was not strong enough to survive on its own and it would be better to let nature take its course.

This got a response from the WWF, once they could find a spokesman who didn’t have an aneurysm on the spot at the thought of letting their logo go extinct. Said response more or less boils down to this: 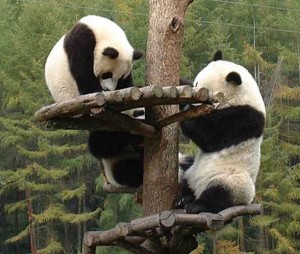 “See The Panda. It’s Our Fault. Love The Panda. We’re Taking Their Mountains Away. Protect The Panda. Give Us Money. Money For The Pandas.”

PS: I wasn’t joking about the dignity thing, although I thought that I was. Packham, again:

‘I reckon we should pull the plug. Let them go, with a degree of dignity.’

These people are hard to parody, sometimes.

Well, according to this Twitter entry, they are – so Chinese zoo workers are trying to get them to exercise more.  The only confirmation of this that I have had so far is this, which is a year old.

I know that even writing this may violate an unstated taboo, but at some point we may have to ask if giant pandas actually want to avoid extinction.  It’s like they keep coming up with ways to provoke natural selection into deselecting them; if they looked like opossums – or even squirrels, which aren’t actually ugly-looking – the panda would have long since left the Circle of Life.  So… are we just encouraging more and more self-destructive evolutionary behaviors with our misguided altruism?  Have we trapped ourselves in a codependent relationship with a bamboo-chewing species of lazy nihilists?  Are we enablers?

PS: That being said, Suicidal Pandas would be a good name for a band.