This is not how this works.

The White House on Monday referred to an armed occupation of a federal wildlife refuge in Oregon as a “local law enforcement matter.”

Spokesman Josh Earnest’s comments come even though the Federal Bureau of Investigation (FBI) has taken charge of the response to the incident along with state and local agencies.

END_OF_DOCUMENT_TOKEN_TO_BE_REPLACED

It’s trolling them so. Darn. Hard: “The White House is removing a federal regulation that subjects its Office of Administration to the Freedom of Information Act, making official a policy under Presidents Bush and Obama to reject all requests for records to that office… the timing of the move raised eyebrows among transparency advocates, coming as it did on National Freedom of Information Day.”  And it’s Sunshine Week!  Can’t forget that.

You get the feeling that USA Today is either scratching its head over the timing of it all, or at least trying to look like it’s scratching its head; while the change doesn’t actually make the White House’s emails permanently inaccessible*, the timing is odd.  As the article notes, the court decision that this action is based on happened back in 2009, and they’re just getting around to formally noting it now.  Then again, from 2009 to, oh, about two or so weeks ago the question was kind of obscure anyway for most people.   END_OF_DOCUMENT_TOKEN_TO_BE_REPLACED 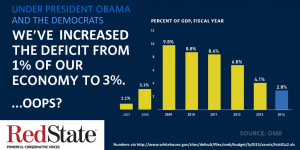 END_OF_DOCUMENT_TOKEN_TO_BE_REPLACED

There are times when I don’t really get this administration’s messaging strategy.

The White House said Wednesday it was “crazy” to attempt to divine the president’s post-election plans for an immigration executive order based on a procurement request issued by the Department of Homeland Security.

“I mean, this is crazy,” White House press secretary Josh Earnest said, adding he would caution reporters against “making assumptions” based on the “procurement of green paper.”

The proposal, unveiled earlier this week by Breitbart News, asks potential contractors to prepare for the possibility of producing up to 34 million green cards and work permits over the next five years.

I mean, let’s game this out. END_OF_DOCUMENT_TOKEN_TO_BE_REPLACED

After an unprecedented security breach Friday night at the White House, the U.S. Secret Service is weighing a series of measures that would move tourists and D.C. residents farther away from the complex to reduce the chances of intruders piercing its security perimeter and endangering the president.

One proposal is to keep people off the sidewalks around the White House fence and create several yards of additional barrier around the compound’s perimeter.

…or at least, what’s likely to happen – anyway, I’d rather to have been wrong.  Although maybe the Secret Service might still try a third option, like take their jobs more seriously…

A Texas man who scaled the White House fence made it through the North Portico doors on Friday night before being apprehended, the Secret Service said.

…apparently leads to a scenario where this is proposed.

Security Service officials said they could prevent such intrusions by shutting down Pennsylvania Avenue to pedestrians. The section of the thoroughfare in front of the White House was closed to traffic after the Oklahoma City bombing in 1995 but remains open to pedestrians. It is often clogged with tourists and is a favorite site for protests.

Bolding mine.  But it’s a good thing that I’m not a cynical blogger, because then I can conclude that the sudden rash of security lapses is completely coincidental.  And that, of course, the White House will not restrict further the People’s* access to it. Because if they did, why: that would mean that the Democrats really and truly don’t have a single drop of populist sentiment in their veins at all. …Or at least that Barack Obama doesn’t.

*When a conservative/Republican partisan hack capitalizes that word, watch out.

You have got to be… kidding me.

There’s a battle raging inside the Obama administration about whether the United States ought to push away from its goal of toppling Syrian dictator Bashar al-Assad and into a de facto alliance with the Damascus regime to fight ISIS and other Sunni extremists in the region.

As President Obama slowly but surely increases the U.S. military presence on the ground in Iraq, his administration is grappling with the immediate need to stop the ISIS advance and push for a political solution in Baghdad. The 3 1/2-year grinding civil war is Syria has been put on a back burner for now. Some officials inside the administration are proposing that the drive to remove Assad from power, which Obama announced as U.S. policy in 2012, be set aside, too. The focus, these officials argue, should instead be on the region’s security and stability. Governments fighting for survival against extremists should be shored up, not undermined.

END_OF_DOCUMENT_TOKEN_TO_BE_REPLACED

Nice of them to admit to it, finally.

“I wouldn’t hold up the White House as the perfect example here,” Josh Earnest says of pay equity for women.

Josh Earnest is the new White House Press Secretary, of course – but while I applaud his shockingly new ability to detect objective reality I do have to ask the following questions: END_OF_DOCUMENT_TOKEN_TO_BE_REPLACED

Betcha the White House wouldn’t have made this regrettably necessary if Susan Rice was a white dude:

It’s very much a bro-ganization over there these days, huh?

Not turning out to be a good week for proxies of the administration: