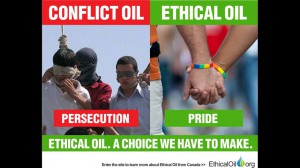 This is not exactly subtle, but then neither is the problem.  Fact is, a lot of energy-producing nations are nasty (and the above horrible example of Iran isn’t even the worst of the bunch) little kleptocracies.  Another, only semi-related fact: the kind of radical environmentalism that thinks that keeping valuable oil resources in the ground is both a sane and sustainable strategy is frankly a luxury that only rich countries and cultures can afford to indulge in.  And we’re not as rich as we were in, say, 2007: there’s not enough margin to indulge our fringe religious enthusiasts over in the environment movement.

I mean, I got nothing against somebody allowing his or her political positions to be informed by his or her religious beliefs, per se.  But radical Greens do not have the right to enforce their narrow, parochial views at my expense – and I don’t see why I have to pretend that their actions aren’t encouraging the violent persecution of gays, Jews, women, and virtually every other sort of ethnic or racial minority across the globe.  There’s almost nothing worse than a sanctimonious bigot convinced of his own moral superiority, which is why I have become so heartily sick and tired of fundamentalist deep ecologists over the last decade.

Enough is enough.  This is a society that separates out church and state: it’s high time that the radical environmentalists start acting like they actually understand that.