It sounds like Rick Wilson is not… exactly looking forward to the Florida gubernatorial election. More like he’s serenely aware that destroying Charlie Crist’s political career is doing the Lord’s work:

Tonight as the sun sets in Pensacola, Charlie Crist will be the Democratic nominee for Governor of Florida. Yes, there’s a kind of pro-forma primary going on between Charlie and the hapless State Senator Nan Rich, a grating South Florida liberal of the Bella Abzug stripe, but everyone knows it isn’t serious. Crist has been the de facto nominee for over a year, plodding along in his faux-shucks way.

In essence, it isn’t about Crist the candidate. It’s about the Democratic Party. It’s a window into the deep, desperate soul of a state party looking for a foothold back into power. They know Crist is lying to them, and they love it. They know he’s playing them for patsies, and they’re lined up around the block to kiss his manorexic backside.

You’ve never seen such abject fawning for a man they know is a pathological liar and weapons-grade weirdo.

And Rick Wilson just goes on from there. The good news is… well, the good news is that the Democrats nominated Crist; and the Florida Democratic party may not really understand yet that Rick Scott has the personal resources to lovingly describe and illustrate every single one of Charlie Crist’s multitude of mutant (I don’t think Rick Wilson used that one) qualities.  And the thing to keep in mind? If you look at AOSHQDD’s numbers it’s looking exceedingly unlikely that Crist will do better in his essentially uncontested primary than Scott will do in his.  That doesn’t mean that Rick Scott will win, but it does mean that Crist isn’t exactly setting the Florida election cycle on fire.

I trust that Rick Wilson will not mind if I suggest that this is his mental state right now: 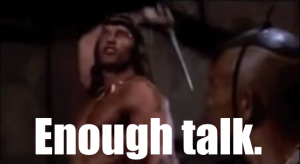 5 thoughts on “So. It is time for the gutter war in Florida-GOV.”