Sunshine State Sarah does her best to mitigate the damage that N number of boo-ers (and boors) did at last night’s debate:

The debate included video questions that were submitted on YouTube, and one came from a soldier serving in Iraq who is gay and asked about the candidates’ opinions on don’t ask don’t tell. There was audible booing after his question…however, please note that it was not the crowd booing. It was only one or two people.

…but said damage was in point of fact done.  It is not the end of the world, and it is not even going to cost us next year’s election, but booing a soldier who is serving in a war zone is still a stupid and low-rent activity that makes you (deservedly) look bad. It also makes the people sitting next to you look bad.  And you don’t get a mulligan on it if the soldier is gay. END_OF_DOCUMENT_TOKEN_TO_BE_REPLACED

Full disclosure: I supported and support the legislative repeal of DADT. So (via @BrianFaughnan) I am personally a little ticked about this:

The Obama administration Thursday evening asked a federal appeals court in California to reconsider its order last week temporarily blocking the U.S. military from enforcing its “don’t ask, don’t tell” policy on gays and lesbians serving in the military.

…not least because, CNN’s spin to the contrary, there is something more going on here than how the LA Times categorized it:

The Justice Department argued that the government wants to stick with the timetable set in last year’s congressional action to repeal “don’t ask, don’t tell.” It provides a grace period for retraining to integrate gay service members, and a 60-day evaluation to certify that the change won’t hurt military readiness.

END_OF_DOCUMENT_TOKEN_TO_BE_REPLACED

This Inside Higher Ed article (H/T: Instapundit) on Columbia’s (and the rest of the Ivy League’s) contempt for the military does its readers a grave disservice: it adamantly refuses to even acknowledge that colleges that ban ROTC from campus are ineligible for federal funding.  This is an annoying, yet ultimately unsurprising omission, given that the only way that anybody can even have a ‘debate’ on this subject is by ignoring the clear will of the American electorate, which is currently involuntarily subsidizing the ‘right’ of academics to remain anti-military bigots.  But there is no debate.  There is no negotiation.  There is merely the law, and whether it is being complied with.

Seriously, let us quote the Solomon Amendment, yet one more time:

(1) the Secretary of a military department from maintaining, establishing, or operating a unit of the Senior Reserve Officer Training Corps (in accordance with section 654 of this title and other applicable Federal laws) at that institution (or any subelement of that institution); or

END_OF_DOCUMENT_TOKEN_TO_BE_REPLACED

…that guard us while we sleep*. I’ll summarize the WaPo’s (quite vile) op-editorial for you: the author (Colman McCarthy) still wants to keep ROTC off campus in this new, post-DADT environment because the military is made up of icky people who actually approve of the thought of going out and fighting evil. With guns. And who have a completely different working definition of Christianity than Colman McCarthy and the rest of his professional ‘peace activists.’ But Colman McCarthy still loves the troops! …all the way over there. But Colman McCarthy doesn’t want them stinking up his precious university system with their guns and God and the inconvenient truth that they embody – said truth being that the only use that a professional “peace activist” has in the fight against evil is that he or she might take a bullet that might otherwise hit a worthwhile human being.

And if you think that was offensive, you should have seen what I originally wrote: it was some deliberately inflammatory (note: not ‘inaccurate’) speculation on how low a professional peace activist like Colman McCarthy would have gone to defeat Bush in 2004, or stop the liberation of Afghanistan and Iraq in the first place. Let’s just say that the terms ‘small child,’ ‘gasoline,’ and ‘matches’ were involved…

(Via RCP – also, note the difference between the old title [‘ROTC Taints University Campuses’] and the new one. RCP generally doesn’t editorialize in its title choices.)

PS: Whichever editor approved this Washington Post article should be ashamed of him- or herself. I do not expect shame, but it’s long past time that we started telling these people when they’ve done something foul.

END_OF_DOCUMENT_TOKEN_TO_BE_REPLACED

Both Andrew Malcolm and Allahpundit are looking somewhat… askance… at President Obama’s apparent “evolution” on same-sex marriage (SSM).  I put “evolution” in scare quotes because there’s no real evidence that he’s actually changed his official opinion on the subject in any way that matters: which should have been apparent from the fact that precisely zero action towards legalizing SSM has been proposed by the President.  Congress did pass a DADT repeal*, but there’s been no push for SSM.

And there’s a reason for that:

Bluntly?  While the population in general has shifted to disapproving of SSM only within single digits, African-Americans remain opposed to the policy by a two-to-one margin.  The President simply does not dare offend that particular demographic.  If that means lying – which the President is doing – so be it.

END_OF_DOCUMENT_TOKEN_TO_BE_REPLACED

But, – various articles to the contrary – the Ivy League’s response to news that the Senate has voted to repeal is not in fact acceptable.  For example, Harvard President Drew Faust responded with “I look forward to pursuing discussions with military officials and others to achieve Harvard’s full and formal recognition of ROTC.”  To which the only reply can be: no, that’s the wrong answer.  The correct answer would have been “Upon formal signing of this law into place, Harvard University will immediately cease and desist all aspects of its civil disobedience campaign and put itself in full compliance with 10 U.S.C. § 983 (the Solomon Amendment).”  That is not negotiable, and I would remind President Faust – and the rest of the Ivy League – of the following facts: END_OF_DOCUMENT_TOKEN_TO_BE_REPLACED

I note this to distinguish myself from Ann Althouse and Joe Sudbay, as both of them did.  I regretfully point this out with regards to the former, if not necessarily the latter; I’m as exasperated as she is that the President is being hypocritical when it comes to DADT, same-sex marriage, and pretty much everything else that falls under the category of ‘gay rights.’  And I suppose that I have a certain detached sympathy for the way that the questions that Sudbay asked on this topic were generally answered by the rhetorical equivalent of the metal end of a belt to the face.

Very detached.  As I’ve already noted, I didn’t vote for the man, and Sudbay belongs to a site that likes to reflexively blame Republicans for everything from the eventual heat death of the universe to the general lack of the McRib sandwich.  I’m not about to pretend that I’m a Buddha or anything.

Via Cynthia Yockey, who I believe also didn’t vote for Obama. 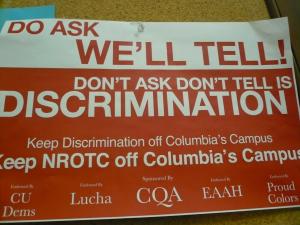 Instapundit passes along an excellent point from one of his readers: the Don’t Ask, Don’t Tell policy has been ordered suspended, via judicial fiat.  The military has complied with the court order, although they strongly disagree with it: there is a moratorium on enforcing DADT, and openly gay soldiers may serve.  Whether you are happy with this development or not*, there is one detail about this which is kind of important: the stated reason Ivy League colleges typically give for forbidding ROTC programs on campus has just gone away.  The military just stopped discharging openly gay soldiers.  It’s over.  The Ivy League won.

So let’s get those ROTC programs back on those campuses.

Seriously. Theoretically, this should happen by, say, lunchtime: but the effective deadline for this is by next January.  That’s when at least one House of Congress abruptly shifts to the control of the political party that takes the Solomon Amendment seriously.  Not to mention the political party that’s going to be looking for places to cut the budget everywhere they can.

END_OF_DOCUMENT_TOKEN_TO_BE_REPLACED

Yes, everybody else knows that the President’s trust-me yesterday on ending DADT is more of the same: nicely prepackaged rhetoric; good, standard delivery – and absolutely no substance whatsoever.  And that won’t change.  So you, and a large portion of the left-sphere, are now unhappy about the whole situation.

I mean, really: what are you going to do about it?  Vote Republican?