The Office for Equity, Diversity, and Inclusion at Harvard University distributed what it is calling “Holiday Placemats for Social Justice” on campus to help freshmen students navigate difficult conversations when they return home for Christmas break.

The placemat, a copy of which was obtained by Campus Reform, offers students tips for talking to their family members about controversial topics such as “Black Murders in the Street,” “House Master Title,” and “Islamophobia/Refugees.” The placemat, divided into four possible topics of conversation, provides students with a series of sample questions they may encounter when they return home to their families along with an acceptable response to each question.

…Because if there’s anything that says “Teaching critical thinking,” it’s “We’ve printed up these talking point sheets for you to stare at while you’re stuck at holiday dinner.”  Seriously, if you’re going to use one, use this one instead: 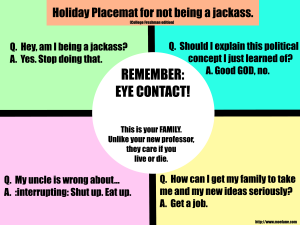 Oh, this is good.

… if the prissy Princetonians insist on renaming the Woodrow Wilson School for Public Affairs, here’s a modest suggestion: Rename it for Warren Harding!

Harding was the anti-Wilson in all of the ways the campus protesters could want. He pardoned most of the political dissenters Woodrow Wilson had jailed during World War I, especially the socialist firebrand Eugene Debs, whom Harding then invited to the White House, saying afterward that he rather liked Debs. He also proposed civil rights protection for blacks, in a speech in Birmingham, Alabama, that drew boos and jeers from the mostly Democratic audience.

Power Line also suggests renaming Yale’s John Calhoun Hall for Calvin Coolidge. Which I could get behind, too.  We do forget that Harding and Coolidge were a breath of fresh, clean air after the rancid miasma that was the Wilson administration – which is to say, progressive academics have done everything in their power to make people unaware of just how bad Woodrow Wilson was, as both a President and a human being.  That’s actually a bit of a pattern…

Excuse me while I do something rude: to wit, introduce brutal reality to a perfectly good witch hunt.

Harvard University police are treating the discovery of strips of tape placed across photographs of black professors outside of a lecture hall as an act of hate, officials from the university said Thursday.

END_OF_DOCUMENT_TOKEN_TO_BE_REPLACED

Hope that you don’t have an allergy to schadenfreude, because this is the pure stuff: ” For years, Harvard’s experts on health economics and policy have advised presidents and Congress on how to provide health benefits to the nation at a reasonable cost. But those remedies will now be applied to the Harvard faculty, and the professors are in an uproar.”  Turns out that adding mandatory procedures and extra coverage costs money; so does the ‘Cadillac tax’ on high-end plans like Harvard’s.  So Harvard went and passed those extra costs to policy holders – like everybody else did – and said policy holders are, well, freaking out.

Seriously: to quote Oscar Wilde’s famous witticism, you would need to have a heart of stone not to laugh at the way Harvard professors are reacting to the news that they now have deductables and out-of-pocket limits and co-pays and all the rest of it.  And it just gets funnier and funnier, the farther down you get.  I personally lost it when I read this bit (bolding mine) : “Some Harvard employees have said they will gladly accept a narrower network of health care providers if it lowers their costs. But Harvard’s ability to create such networks is complicated by the fact that some of Boston’s best-known, most expensive hospitals are affiliated with Harvard Medical School. To create a network of high-value providers, Harvard would probably need to exclude some of its own teaching hospitals, or discourage their use.” It’s the consternation at it all.  It’s like Harvard academics thought that there was a line, and they were on the right side of that line, and it was just the people that they didn’t care for who would have to deal with any minor consequences arising from the adoption of Obamacare.  Well, guess what? Turns out that we’re all just Bozos on this bus… and that includes the Bozos over at Harvard University. END_OF_DOCUMENT_TOKEN_TO_BE_REPLACED

There’s a problem with this article in the Harvard Crimson (“The Case Against Boycotting SodaStream“): it assumes that there’s a legitimate case for boycotting Sodastream. There, of course, is not. Harvard University Dining Services decided to unilaterally remove Sodastream from its cafeterias simply because the company is run by Jews. Oh, dear, excuse me: “Israelis.” I understand that Alan Dershowitz may have a problem with bringing up this awkward fact, and I even sympathize. But I’m under no obligation to pretend that that fact doesn’t exist.

Especially since Harvard University’s historical animus towards Jews is well known, as is indeed most of the Ivy League’s.  They’ve gotten a pass on it largely because Ivy League alumnae are over-represented in top government and media positions.  If we saw this kind of historical discrimination take place in institutions not beloved of Northeastern elites then we’d never hear the end of the complaining.

I know, I know: I’m as white as a polar bear in a snowstorm eating vanilla ice cream. Still. Geez. White people.

My one observation on this – I largely share Sonny’s stunned admiration for the sheer insanity on display here* – is that I certainly hope that the minority students in the demonstration have noted that this is what happens when you let white people run your demonstrations. Well, liberal white people. Conservative white people would have run this differently, starting with making sure that the non-white people were doing something more relevant than acting as a mobile background**.

*You have got to read this story. Just don’t read it at work, because one of the pictures is NSFW.

**Yes, I’m scoring the Dean of Students as a white dude. I will also be merciful and not repeat his name, because he’s going to be hearing about the ‘lifted onto the back of a half-naked man’ thing for the rest of his life. I am not without mercy.

…and Harvard does not want to know if they have any more.  I am rapidly coming to the conclusion that I do not blame them for that.

How nice of them.  Harvard University is expected to sign an agreement tomorrow where they will resume funding a naval ROTC program and allow a military director officially on campus.  This is, of course, insufficient – the last time I checked, the US military has more than one branch, and the Solomon Amendment did not permit a gradual approach towards obeying federal law [see UPDATE] – but I suppose that we have to make some allowances towards narrow provincial prejudices like those found at Harvard.

Although if it was up to me, we wouldn’t be making any allowances towards this kind of prejudice at all.  Which is probably why it is not up to me.

[UPDATE]: I am politely, gently, and quite relentlessly schooled on some of the technical aspects of this development in comments by a friend of mine who I know knows about this sort of thing.  I still reserve the right to sneer at Harvard University’s provincialism in general.

But, – various articles to the contrary – the Ivy League’s response to news that the Senate has voted to repeal is not in fact acceptable.  For example, Harvard President Drew Faust responded with “I look forward to pursuing discussions with military officials and others to achieve Harvard’s full and formal recognition of ROTC.”  To which the only reply can be: no, that’s the wrong answer.  The correct answer would have been “Upon formal signing of this law into place, Harvard University will immediately cease and desist all aspects of its civil disobedience campaign and put itself in full compliance with 10 U.S.C. § 983 (the Solomon Amendment).”  That is not negotiable, and I would remind President Faust – and the rest of the Ivy League – of the following facts: END_OF_DOCUMENT_TOKEN_TO_BE_REPLACED

…and why it showed up in a press conference about the President’s proposed health care rationing program – OK, I can’t help you there.  But you can get the basic details of the Gates arrest here (via John Lott’s Website).

The scene – two black men on the porch of a stately home on a tree-lined Cambridge street in the middle of the day – triggered events that were at turns dramatic and bizarre, a confrontation between one of the nation’s foremost African-American scholars and a police sergeant responding to a call that someone was breaking into the house.

It ended when Gates, 58, was arrested on charges of disorderly conduct in allegedly shouting at the officer; he was eventually taken away in handcuffs.

But the encounter is anything but over. Some of Gates’s outraged colleagues said the run-in proves that even in a liberal enclave like Harvard Square, even with someone of Gates’s accomplishments, a black man is a suspect before he is a resident.

Bolding mine, and there to highlight my sardonic observation:  what do you mean, “even?” Not to be rude about it, but there ain’t no racist like a Bostonian racist*.  Which is not necessarily a knock on the cop; it’s a knock on the neighbor who called the cops on Prof. Gates in the first place.