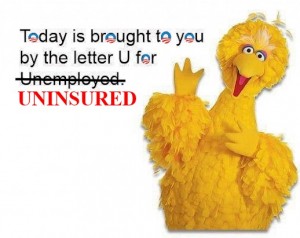 They’re getting quite the collection.

Some things to remember:

END_OF_DOCUMENT_TOKEN_TO_BE_REPLACED

(H/T: Instapundit) So, Politico publishes this story called “Four hard truths of health care reform“ – which is Politico’s way of saying ‘Obamacare has been an unmitigated disaster, but we’re going to try to spin it as well as we can anyway’ – and there’s two reasons why the tone of said story is amazing in its effrontery.  The first reason is the way that it presents the aforementioned ‘hard truths’ as if they had just only now been revealed unto the populace, instead of being pretty much known all along.  Don’t believe me?  Take a look: below is each ‘hard truth’ Politico documents. END_OF_DOCUMENT_TOKEN_TO_BE_REPLACED

Here you go. In the interests of educating the populace – even those poor unfortunates who are stuck getting their news from The New York Times. God help them – here’s the central argument: forcing individuals to engage in commercial activity is not a Constitutionally enumerated right of Congress.  Buying health insurance is a commercial activity.  Proponents argue that the Commerce Clause applies, but if it does then frankly the Tenth Amendment is meaningless.  The Ninth, for that matter.  This would, of course, shock the life out of the Federalists and the anti-Federalists, given that these Amendments were explicitly ratified to reassure the latter that there would be clear limits to governmental power in the new Republic.

No, I am not going to explain any of those terms: if you have to ask what any of them mean, then you are not qualified for participation in this conversation.

PS: Almost forgot: yes, most locales require you to buy car insurance if you wish to operate a car.  Guess what?  There’s no federal mandate requiring citizens to own a car.  That means that car ownership is ultimately a choice – unlike, say, breathing. That means that the analogy is too tenuous to succeed.

There is a striking (if you’ll pardon the pun) dichotomy taking shape in the Wisconsin public school system right now, and it’s one that should hardly be surprising to anybody who was paying attention to this spring’s labor union reform struggles.  Said dichotomy is as follows:

The Weekly Standard article linked to above lists Milwaukee (354 teachers fired) and Kenosha (212 teachers to be laid off).  The first example is particularly noteworthy because: a), Milwaukee had had to fire an additional 482 teachers in 2010; and b), the Milwaukee school board estimates that it could rehire at least 200 of their teachers if the union simply agreed to instituting employee contributions to their own pensions (5.8%).  The union (in the form of its president Bob Peterson*) refused, of course.  They’re rather defensive about it, too – which is nice; I always like to see admissions of shame and remorse, even if it’s just being restricted to subconscious attitudes. END_OF_DOCUMENT_TOKEN_TO_BE_REPLACED

The topic was on Obamacare: specifically, its repeal.  Senator Johnson had an article in the Wall Street Journal today on his personal issue with health care rationing; we discussed that, the ongoing judicial struggles over Obamacare, and what activists can do to help resolve this problem.

Senator Johnson’s decision to run for office in the first place can be ‘credited’ with the passage of Obamacare, which is news that will no doubt delight supporters of former Senator Russ Feingold.  Also, some further details of the future economic effects of the health care legislation can be found here, via the American Action Forum.  Check it out.

“…The pundits turn their bleary eyes to you:”

I’m going to agree with Jen Rubin, here: the Left was not prepared to have a judge rule that Obamacare as a whole was unconstitutional.  That courts were starting to conclude that the individual mandate was unconstitutional was something that people on the Other Side were beginning to get their heads around; that the whole thing thus had to be thrown out is still Here Be Dragons territory for that crowd.  And that it was because the administration misplayed its hand by arguing too forcefully that the individual mandate was the keystone to the whole thing?  Priceless.

Meanwhile, let me join the rest of the blogosphere by admitting that from this point on it all comes down to what Justice Kennedy has for breakfast the morning the Supreme Court decides this one, and whether he liked it or not.  Ach, well: it still beats, say, Egypt’s current method of resolving domestic political disputes.

To the point where they’re spamming their members* with dire, last-minute pleas to call up their Members of Congress and tell them that a pork-laden monstrosity that hasn’t had majority support for the last year or so is actually quite popular, really, no fooling.

I feel that I should point out several things to Organizing for Obama America:

END_OF_DOCUMENT_TOKEN_TO_BE_REPLACED

(H/T Instapundit) Come, I will conceal nothing from you: I respect Barney Frank’s political skills.  I absolutely can’t stand what he uses those skills for, but I recognize that Rep. Frank has them, and that he knows how to use them effectively.  To give just one example, Rep. Frank was about the only Democrat to make it through last year’s August health care meltdown without looking like either an abject coward, or a purblind fool*. You don’t have to like him – and I don’t – to recognize that.

Which is why Rep. Frank calling the Obama administration “dumb” for putting out an expectation of 8% unemployment if the stimulus passed is so interesting. First off, it’s a refreshing change from the previous narrative, which was that you were a dirty racist right-wing homophobe for taking the Romer-Bernstein graph seriously in the first place**.  True, it turns out that people were idiots for taking the stimulus as a job saver seriously, but that’s a different issue. END_OF_DOCUMENT_TOKEN_TO_BE_REPLACED

In precisely the way that a vulture circles a dying jackass in the badlands, yes.  Here Patrick Caddell is telling Fox News just how badly Obamacare is going to hurt the Democrats (hint: I picked the vulture/jackass/desert metaphor for a reason):

Admittedly, he’s been yelling about this since March, and admittedly he’s been privately called by a colleague of mine as sort of a Democratic David Frum (which is a vicious insult to Caddell’s effectiveness, reasoning abilities, and possibly his ability to breed) – still, that’s some tasty, tasty despair there. Accurate despair, seeing as Obamacare currently polls even worse than the President right now, but I guess that ‘tasty’ and ‘accurate’ are not actually mutually exclusive…

PS: By all means, Democrats: count your cash-on-hand and dismiss Caddell completely.  Much obliged.