Found here. Short version: Hillary Clinton is doing unto Bernie Sanders what Barack Obama did unto her. Also: I despise Commies.  But you knew that already. God knows I’m hardly shy about expressing that opinion…

Found here. Short version: …I’m a little worried about turnout, actually.  In fact, that’s my major worry. I’m going to be keeping an eye on the total voters.

This should send up warning signs for the Trump campaign.

As would the underlying AP article. Speaking clinically, the problem is that while Donald Trump may understand his tactical problem, he may not quite understand his strategic one. Trump’s tactical problem is that the man’s previous assumptions led him to conclude that it was smart to ignore the ground game. He understands that this was incorrect, and is putting in more. Great: good for him. Trump’s strategic problem is that he’s still carrying around his previous assumptions, which seem to be that a) Donald Trump will inevitably win and b) he doesn’t have to spend any money to do it, either.

The reality is that every day that Donald Trump delays in writing his campaign a check for forty million dollars for a start, and then promptly spending it on getting an emergency infrastructure up and running, is a day where he’s losing the election. I don’t know whether or not Trump’s ground game in New Hampshire has improved to the point where it can take advantage of his current polling numbers; like Iowa, we’re seeing a very exciting experiment going on in New Hampshire about what is a good political rule of thumb, and what is not. But if you’re trying to win this thing, well: better safe than sorry, right? I mean, look what happened in Iowa.

Just off of the top of my head:


This is probably wrong. The numbers, I mean. But I think that the basic idea – Trump falling behind but ending ahead, Cruz and Rubio battling it out for second place, Kasich at a high-water mark, Carson fading, and everybody else getting their coats on – is sound enough.  Bear in mind: if Trump comes in second his campaign will definitely start to death spiral. If Rubio comes in ahead of Cruz Ted Cruz is not actually in trouble, because Iowa and New Hampshire rarely agree with each other.  Kasich would need to win New Hampshire before we’d all stop writing off his campaign. And so on.

Also bear in mind: nobody knows jack about what’s going to actually happen next week. We’re mostly just good at sounding confident. Largely because there’s never a penalty for failure. I mean, look at me: I told everybody that Trump would either win or be in fourth place, and guess what happened?

One of the reasons why I privately worried about Donald Trump winning Iowa is because I’m pretty sure that he’s going to win New Hampshire, and for precisely the reasons that Dan McLaughlin states:

New Hampshire is the best possible state for Trump. It has a primary, not a caucus; a long history of high voter turnout built on a culture of town meetings, scores of tiny state legislative districts, and frequent contested statewide elections (the Governor is up for re-election every two years, the House and Senate seats flip parties with regularity); and way more secular, white independents than any other state. And Trump has had a double-digit lead in the RCP poll average in New Hampshire continually since early August.

Trump winning Iowa and New Hampshire would have… complicated… matters for the GOP.  And we’ll leave it at that.

Possibly you may remember the Northern Pass story from last year: in a nutshell, Maggie Hassan’s campaign took forty-five thousand in illegally same-day campaign contributions from three Big Labor unions (SEIU, UFCW, and IBEW). This was generally considered to be at least suspicious, as all three unions want New Hampshire’s proposed Northern Pass transmission line project to go through, while radical environmentalists of course instead want people in New Hampshire to be cold, hungry, and in the dark.  Was it a bribe? Nobody knows! Was it illegal? Well…

After the state Republican Party filed a complaint, Attorney General Joe Foster was tasked with deciding whether the $45,000 in union donations to Hassan’s campaign were legal. He decided that a person becomes a candidate at midnight on the day he or she announces. Under that rather creative interpretation, the two $10,000 donations were legal, but the $25,000 contribution was not.

Further complicating the story, the PACs had not registered in New Hampshire, making their donations felonies. Foster ordered the PACs to register, but did not punish them for the violations, which was very lenient of him.

END_OF_DOCUMENT_TOKEN_TO_BE_REPLACED 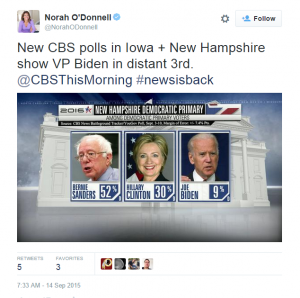 END_OF_DOCUMENT_TOKEN_TO_BE_REPLACED

…poll here*.  Governor Maggie Hassan is still popular in New Hampshire – although that trendline is interesting – but she’s not going to beat an incumbent with numbers like that, and that is the way of it. If the Democrats lose her as a candidate then Senator Kelly Ayotte will have a smooth glide path for re-election.  Heck, even if the Democrats keep Gov. Hassan as a candidate then with those numbers Senator Ayotte will still have a smooth glide path for re-election. END_OF_DOCUMENT_TOKEN_TO_BE_REPLACED