A former aide to Russian President Vladimir Putin and prominent political figure was found dead on Thursday in a Dupont Circle hotel room, according to the Russian Embassy in Washington.

The spokesman confirmed Russian media reports that Mikhail Lesin, a former press minister and ex-executive of Gazprom-Media, died in D.C.

END_OF_DOCUMENT_TOKEN_TO_BE_REPLACED

Because I read this…

#Nemtsov gets killed in the middle of Moscow, and suddenly #Snowden is carpet bombing asylum requests to get out of #Russia. Good luck, Ed.

…and I immediately thought of this poem by Rudyard Kipling. END_OF_DOCUMENT_TOKEN_TO_BE_REPLACED

Well, this is appalling.

So Putin will launch an invasion of Ukraine to avenge Nemtsov's death? Bravo. Bravo. RE https://t.co/f2JSOYyw7x

Both that the Putin regime thinks that it can get away with this, and that the Putin regime will probably be correct, at least in the short term. Sure, why not? Blame the assassination of one of the few remaining opposition leaders on a country that you’re planning to invade anyway. Who’s around to stop you, these days?

You know, I’m pretty sure that I’ve seen this movie before.

Except that I was on TV Tropes again, looking up the A-Team

How you get from there to Putin is just one of that site’s little ways. Come on; you know this.

“I do not think that ‘top-rock’ or ‘down-rock’ breakdance technique is compatible with alcohol or drugs,” Putin told cheering hip-hoppers who responded with chants of “Respect, Vladimir Vladimirovich”.

No, that’s not really taken out of context: Putin went to hang with Russian rappers. I think that I’ve mentioned before that the man really needs to get cracking with discovering that he’s actually descended from the Princess Anastasia?

…except that Russians get damned touchy about even the suggestion that they’re not as civilized as everybody else; and I while I don’t know whether they’re checked out on the Conan

movies, I do know that somebody just smashed Facebook and Twitter to take down one Georgian.  So I’ll just restrain myself to one comment about this picture: 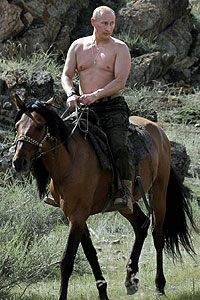 Not bad; but you forgot the greatsword slung behind one shoulder, Vladimir.

– but never mind that now: read this article about the recent Russian poll of the greatest Russian ever. (Stalin in third, Lenin in sixth):

It would feel self-indulgent to launch a jeremiad about how very, very evil Lenin and Stalin and their system were. The novelist Martin Amis did this in a book a little while ago, Koba the Dread, which is essentially about his own belated discovery of that truth. And how his father, Kingsley Amis, and godfather, Robert Conquest (who exposed the atrocities of the Great Terror for the west) had been … right all along while Amis and his college chums had been proclaiming the glories of the Soviet Union and Mao’s China in the 1960s. It was nice to see Amis fils getting around to getting it right, but the tone of shocked baby-boomer awakening bordered on the amusing.

No, it seems to me there’s another point, a narrower focus to be sought here, and it comes from – unsurprisingly – Alexander Solzhenitsyn, whose The Gulag Archipelago, smuggled out to the west thirty-five years ago, documented the abomination of the Soviet internment camps with a terrifying mixture of Biblical prophet and meticulously detailed scientist. (Solzhenitsyn, who did more to expose the reality of Lenin and Stalin and the Soviet empire to the world than anyone else who ever lived, and did so with unfathomable courage, did not surface anywhere near the top of the balloting, by the way.)

Here’s the issue that seems necessary to register after considering this vote: in The Gulag Archipelago Solzhenitsyn makes the point that as of 1966 some 86,000 Germans had been convicted in Germany for Nazi crimes. But what about in the Soviet Union – the Gulag, the enforced starvations, the Terror? “In our own country (according the reports of the Military Collegium of the Supreme Court) about ten men had been convicted.” (The italics are his.) And he asks, “What kind of disastrous path lies ahead of us if we do not have the chance to purge ourselves of that putrefaction rotting inside our body?” END_OF_DOCUMENT_TOKEN_TO_BE_REPLACED

Is this some sort of odd Russian thing? (Also via The New Ledger)