END_OF_DOCUMENT_TOKEN_TO_BE_REPLACED

…that’s worse than what happened to him today. END_OF_DOCUMENT_TOKEN_TO_BE_REPLACED

Oh, I understand the reasoning – Donald Trump was watching his semi-literate tweets get turned into killer laugh lines at Marco Rubio’s epic rally this morning – but I somehow suspect that bringing in the guy who didn’t survive a primary pummeling to go after the guy who did is not going to work out as well as Donald Trump hopes that it will.  It may not even win him the news cycle.  All Marco Rubio has to do now is just simply make fun of Chris Christie*.

Mind you: I heard this rumor a while back, and in a world where Donald Trump had had a good debate last night it might have cemented his lead today.  As it is… it looks weak on Trump’s aprt. Yes, I know that Christie is a good communicator and attack dog and money dude and whatnot, but note that he’s not in the race anymore and Marco Rubio (and Ted Cruz!) are.

See more from Leon Wolf, who I basically agree with here but I didn’t want to pass up the chance to roll my eyes.

*I’m not going to, because I’m from NJ and a lot of the stuff that other people find mock-worthy doesn’t really look weird to me.  But this is just reactive, weak stuff from Trump, here.  And it won’t be the story of the day.

I was listening on CSPAN to yesterday’s speeches at some RGA (Republican Governors Association) meeting, and it struck me: we were all assuming a… somewhat ‘meh’ year for the RGA. And it was realistic to do so: we had had such a great year in 2010 everybody figured that there’d be a reversion to the mean. I mean, we knew about Tom Corbett in Pennsylvania. We figured that Florida was going to be heavy lifting, and many of us figured that Rick Scott wouldn’t make it through. Maine and Paul LePage, likewise. Sam Brownback in Kansas was being treated as a dead man walking. There were even people worried about Rick Snyder in Michigan and Scott Walker in Wisconsin.

…Well. Corbett got eviscerated, on cue. Sean Parnell in Alaska eventually lost, in what can be charitably called a ‘mess’ of an election. But all those other people won – and then we flipped Illinois, Massachusetts, Arkansas, and Maryland.  That’s a solid win for the RGA, which means that it’s a solid win for Chris Christie.  Maryland’s Governor-elect Larry Hogan in particular couldn’t thank Christie enough for the RGA’s help, which was indeed easily the most significant support that the Hogan campaign got from the GOP*.  That will have an effect on donors and organizations. And it’s a legitimate one: being able to win in tough places to win is pretty much the yardstick that we’re using for our Presidential candidates**. END_OF_DOCUMENT_TOKEN_TO_BE_REPLACED

…the RGA isn’t about to mess with that. This is not a bad year to be a Republican governor, per se: but it’s an important year, and there are a LOT of important races on the table. If the RGA can lock in its wins, we will ensure that we have a fantastic bench for Republican candidates for the next decade. Six million bucks in a month is not the least compelling argument in the world.

Governor Christie’s administration did not defend one of the state’s stringent gun laws in a case where two retired arson investigators challenged rules over who can carry a concealed weapon, according to an appeals court decision released Monday.

The attorney general who made that decision, Jeffrey Chiesa, is one of Christie’s closest advisers and left that law enforcement job when the governor named him to a temporary post in the U.S. Senate earlier this year. He notified the court that the state would not be appealing a trial court decision in papers filed a month before the Newtown, Conn., school shooting last year that prompted a push for gun restrictions including a ban on high-caliber assault weapons in New Jersey.

In Monday’s ruling, a state appeals court upheld restrictions on gun carry permits, and noted the Attorney General Office’s failure to defend the state’s own statutes saying the attorney general “regrettably” decided not to participate.

END_OF_DOCUMENT_TOKEN_TO_BE_REPLACED

There are other good combos, of course.

This observation by Allahpundit over the Christie/Walker dynamic in the primaries is worth noting:

One crucial thing that righties learned about [Scott] Walker during and after the Thunderdome in Madison over collective bargaining is that the guy simply will not bend on a policy he believes in, no matter how much acid the left spits at him and how far into the tank the media goes for Democrats in attacking him. He’s unflappable. That’s hugely significant when you’re thinking of throwing your vote to a guy who isn’t the most orthodox conservative in the field. The big worry about [Chris] Christie is that he’ll be wooed by media adulation of his charisma and his own rhetoric about the glories of compromise into governing even further from the center than people think. That’s less of a worry with Walker, the guy who became a right-wing rock star precisely because he wouldn’t compromise.

END_OF_DOCUMENT_TOKEN_TO_BE_REPLACED 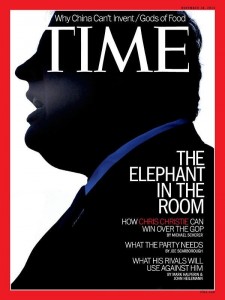 “Elephant in the room?” You have to admit: that’s some dang good passive-aggressive, plausibly deniable fat-shaming, there (note that Allahpundit over at Hot Air noted the exact same sneak-hit that we at RedState did).  Fortunately, our own Ben Howe notes that you can play with the symbolic meanings of the totem animals of both sides: END_OF_DOCUMENT_TOKEN_TO_BE_REPLACED

I don’t like calling DOOM before I’m absolutely, positively sure, but: the New Jersey governor’s race is over.

Yeah, I know that you knew that already, but Barbara Buono’s response should start making Democratic state legislators up for re-election nervous. That’s the response of somebody who thinks (accurately) that she was hung out to dry by her own party establishment and who has decided that she doesn’t care whether people expect her to take one for the team anyway.  Which means that it’s the response of somebody who doesn’t care if her own party wins the downticket races on Election Night.

Fine by me.  The more seats we gain in the state legislature, the more future candidates we can cultivate. Buono wants to help us with that out of spite, well, that’s not my problem.

State. Sen. Brian Stack and his Assembly runningmates are set to endorse Gov. Chris Christie tomorrow according to a source familiar with the decision.

Stack, a Democrat who is also mayor of Union City, has long been a reliable vote for the governor over the past four years, but many politicos questioned whether he would throw an active endorsement to Christie.

Stack is running alongside Assembly candidates Raj Mukherji and Carmelo Garcia, who will also give their endorsement to Christie, according to the source.