The Wall Street Journal reports that, on Wednesday, as predicted, the panel convened by Governor Cuomo to study fast-food wages will formally recommend paying workers statewide $15 an hour — a substantial raise that’s nearly double the current rate of $8.75. The only step left is an okay from Acting Labor Commissioner Mario Musolino (which he’s expected to give), and then Cuomo can move forward (which there’s every indication he will) regardless of how the Legislature feels about it. So it looks likely that a big raise will come to New York’s fast-food workers.

END_OF_DOCUMENT_TOKEN_TO_BE_REPLACED 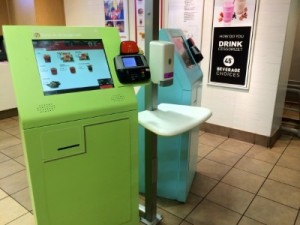 Via Legal Insurrection, via Hot Air.  That one station represents three, maybe four part time jobs – and that’s assuming that it processes orders about as fast as a human would.  If it can do so at a higher rate than the equivalent flesh-and-blood cashier then that one item will eliminate about fifteen or so jobs.  And, let me tell you: managers hate having human cashiers.  Human cashiers give out incorrect change, get scammed out of money, ring up the wrong orders, give out unauthorized upgrades in the (usually vain) hopes of impressing the opposite or desired sex, and generally stand there looking vaguely unappealing.  Plus, now you have to give employees medical benefits, despite the fact that turnover is so high in the fast food industry that there’s a reasonable chance that they’ll be gone before the paperwork clears. END_OF_DOCUMENT_TOKEN_TO_BE_REPLACED

Lemme translate the Scotsman’s spokeswoman for you.  To give you the context; the unions are trying to organize fast food restaurant workers again, and having a slow going at it because the only compelling reason that anybody in Big Labor can come up with for unionizing fast food workers is We need the dues, man. So they had a bunch of protests in a bunch of places – or, as Politico rather laughably put it, “Fast food strike takes over 60 cities” – and that’s pretty much how it went.  Nobody’s really expecting any movement:

In the past, such strikes on a smaller scale have forced some fast-food chain stores to close temporarily. But McDonald’s isn’t expressing much concern about the impending event.

“It will be business as usual for us,” Casillas Ofelia[*], a spokeswoman, said in an email. “We respect our employees’ rights to voice their opinions. Employees who participate in these activities and return to work are welcomed back and scheduled to work their regular shifts as usual. … The story promoted by the individuals organizing these events does not provide an accurate picture of what it means to work at McDonald’s.”

Translation: if you want to ‘strike’ on your own time, whatever.  Miss your shift, lose your job.  And why are you calling Corp? Most of our stores are owner-operated. END_OF_DOCUMENT_TOKEN_TO_BE_REPLACED

I just deleted a eight paragraph post on this account of what will be a doomed attempt to organize fast food workers in Detroit (yeah, I know: the timing was perfect, huh?).  As you might guess, I was not impressed with their chances for success; alas, I was also boring, so I just deleted the whole dang thing.  Bottom line: there are reasons why Big Labor hasn’t been able to organize fast food employees before*.

PS: I suppose that I should note that I own a few shares of McDonald’s stock.  God only knows where they are at this point.

*Not least of which is: any half-smart franchise willing to contemplate letting the unions in would absolutely insist on mandatory drug testing.  It’d be the only way to get useless workers fired under that scenario**.

**I spent seven years at the Scotsman as a spatula serf.  Who was smoking weed, back then?  God love you, man: who wasn’t smoking weed?  From the store manager on down.  NTIWKAAT, of course.