See if you can detect the not-very-hidden flaw in the Ohio redistricting proposal that passed last night:

The current five-member redistricting panel, which includes the governor, secretary of state, auditor and two legislative appointees, will be expanded to seven members with two additional legislative selections.

If at least two minority party members vote to approve the new maps, they take effect for 10 years. If not, then the maps must be redrawn again in four years.

END_OF_DOCUMENT_TOKEN_TO_BE_REPLACED

Nice to see that the DCCC still hasn’t learned how to play this game:

The Democratic Congressional Campaign Committee was involved in reviewing maps submitted Tuesday to the court by one group of plaintiffs challenging the state’s congressional districts.

The admission that partisan organizations were involved in drawing maps that are formally being considered by the court adds yet another layer of political intrigue to the case. The Florida Supreme Court invalidated the current congressional lines back in July — finding them unconstitutionally drawn to favor Republicans and at odds with state anti-gerrymandering provisions — in part because Republican consultants were involved in drawing the first round of maps.

…so having a bunch of Democratic consultants draw the second round is probably not going to fly all that well with the courts. Kind of a rookie error there, in fact. I mean, Democrats in California were much better in sneaking their partisan maps through the process, honestly. END_OF_DOCUMENT_TOKEN_TO_BE_REPLACED

This is an unintentionally entertaining piece: “Top Democratic attorneys are arguing before state and federal courts that district maps drawn in a handful of states violate the Voting Rights Act by improperly packing African American voters into a small number of districts, limiting their influence.”  Mostly because that was one of two times where the phrase ‘African American’ was used (the other was “The U.S. Supreme Court in March ordered a lower court to consider whether Alabama’s legislature similarly packed African American voters into state legislative districts to minimize their influence[*]”).  This is an issue because there were so many other opportunities for Reid Wilson to use the term ‘African American:’ END_OF_DOCUMENT_TOKEN_TO_BE_REPLACED

Reading this and this is more or less forcing me to remind folks of something: it is, in point of fact, perfectly legitimate for a political party to use its control of a state legislature to screw over the opposition party.  Note the use of the term ‘legitimate.’ I’m not saying that it’s nice or decent or even smart; merely that this is the life that we have chosen.

Case in point: Illinois legislature was, and is, heavily Democratic.  In 2010 the Republicans gained four federal Congressional seats, kept a fifth that they were expected to lose.  In 2011 the state legislature, having to redraw the maps anyway because Illinois was losing a seat*, engaged in ruthless redistricting.  In 2012 the Republicans lost five federal Congressional seats**  And that is how it works.  Partisan affiliation is not a protected class. You identify with a political party, you take the political party’s lumps.  Simple as that.   Don’t like that particular set of lumps?  Switch parties: maybe the new set of lumps will be more to your liking. END_OF_DOCUMENT_TOKEN_TO_BE_REPLACED

People who whine about Republican redistricting absolutely HATE it when you bring up Section V of the Voting Rights Act, and will resolutely ignore (if you let them) the racial gerrymandering that it more or less mandates.  So be sure to ask those people point-blank if their redistricting ‘reform’ position means that they’re going to openly advocate for eliminating majority-minority districts – and do that preferably when they’re in front of an audience with a decent amount of minorities in it.

Personally, I’m not fond of gerrymandering.  But the aforementioned Democratic whining on the subject mostly comes down to white Democrats whining about Republicans because they don’t have the guts to criticize minority Democrats; so I can’t say that my sympathy for the whiners’ plight is overwhelming, sorry.

I had heard that Darcy Burner – best known for being a Democrat who couldn’t beat a Republican in Washington state during the two worst election cycles for Republicans in living memory – spoke yesterday at Netroots Nation in Providence, RI (I happen to be in town myself for the much cooler Breitbart Awards conference that the Franklin Center/the Heritage Foundation is putting on). Feeling all very nostalgic about Ms. Burner and everything, I decided to see if she had been up to anything. Turns out? Yup! Darcy’s doing what she does best: making life easier for Republicans.

It goes like this. WA-01 is a recently redrawn district (more on this later) that is going to be strenuously fought over this election cycle.  It was held by Democrat Jay Inslee, but he resigned the seat in order to run for Governor. As everyone reading this probably knows by now, House seats may not be assigned; if there is an empty seat then there must be an election. So there will be two elections in November: one for the month remaining in the current, and one for the next, full term. This happens all the time, and people should treat the news that this sort of thing causes headaches for the national parties with all the respect that such news deserves: yup, you guessed it, none at all.
END_OF_DOCUMENT_TOKEN_TO_BE_REPLACED

As the Texas redistricting fiasco continues, Reuters reports that Republicans are losing the opportunity to capture the state’s Latino vote.

José Manuel Lozano, who represents District 43, started the month of March as a Democrat. Now the Mexican-American business owner is a Republican.

END_OF_DOCUMENT_TOKEN_TO_BE_REPLACED

I dunno.  They’re certainly scurrying around like… things that scurry… in Albany tonight.  This report suggests that the fix is in for the state legislature, and that Governor Cuomo is going to cave on his promise to support reform today, in exchange for promises of reform tomorrow; but it also suggests that the NY legislature has decided to let the courts design the Congressional maps, after all.

Which means… OK. Current breakdown is 21 Democrats, 8 Republicans.  After this election, we’re looking at… OK, Hinchey is retiring and Turner is running for Senate, and their districts were erased.  20 Democrats, 7 Republicans.  Assume that Hochul and Buerkle cancel each other out*.  Still 20/7.  Of the remaining Members of Congress, the two most vulnerable are Bishop and Owens, and I think that at least one of them is going to be tossed.  So it’s reasonable to think that a 19/8 D/R result is very possible… and that even an 18/9 D/R one is not outside the realm of possibility.  Which is to say, one where the NY Republican delegation somehow increases in size in the face of a two-seat CD loss, or at least stands pat. END_OF_DOCUMENT_TOKEN_TO_BE_REPLACED 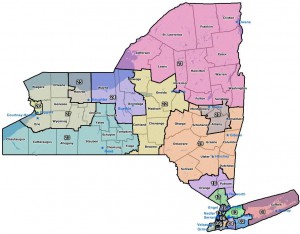 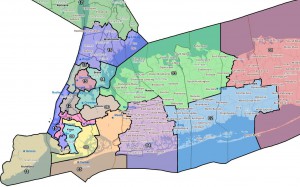 …and there’s going to be several Members of Congress who will be very unhappy if that happens.  Including Steve Israel of the DCCC. END_OF_DOCUMENT_TOKEN_TO_BE_REPLACED