This is awkward for too many people, so it will be ignored:

…a paper on polarization and inequality released in August by political scientists from Princeton, Georgetown, and the University of Oregon (and highlighted this week in a Washington Post article) provides some empirical evidence that Democratic Party’s leftward drift is more pronounced than the GOP’s rightward drift, at least at the state level. The study’s overall argument is that income inequality has increased political polarization at the state level since the 1990s. But the authors find that that this happens more by moving state Democratic parties to the left than by moving state Republican parties to the right. As the Democratic Party lost power at the state level over the past 15 years, it also effectively shed its moderate wing. Centrist Democrats have increasingly lost seats to Republicans, “resulting in a more liberal Democratic party” overall. The authors find that the ideological median of Republican legislators has shifted much less.

END_OF_DOCUMENT_TOKEN_TO_BE_REPLACED

…[Five people were] charged today in a 29-count indictment with participating in a racketeering conspiracy and other crimes, including bribery; conspiracy to commit mail, wire and honest services fraud; and multiple counts of mail fraud, falsification of records, bank fraud, making false statements to a financial institution and money laundering, the U.S. Attorney said.

END_OF_DOCUMENT_TOKEN_TO_BE_REPLACED

So, you think that we have problems?

Goodness gracious, but that’s the Democratic Nightmare Scenario right there, huh? Hillary Clinton is still on track to get the nomination in early states… but the populace in general simply Does Not Like Her.  The Washington Post article concluded, with as much hope as it could muster (not much): END_OF_DOCUMENT_TOKEN_TO_BE_REPLACED

I really wish that the Media wouldn’t write stories like these.  They’re inimical to the long-term plans of the Republican party; worse, they highlight things that we, put simply, would prefer not be mentioned in public.  Mind you, we can overcome these kinds of revelations anyway, but it’s all still a reminder that The Media Is Not Our Friend:

You would expect that a political party that recently won a majority in the U.S. Senate, gained strength in the House, captured 31 of 50 governorships and gave 24 of those governors majorities in their legislatures would be basking in predictions of future success. But rather than luxuriating in the warm glow of bright prospects, the Republican Party is, in the eyes of some experts, on track for extinction.

The reasons center on demographic forecasts showing groups likely to vote for the GOP in steep decline and Democratic-oriented voters surging. But such “in the long run” predictions resemble those fanciful 1930s prophecies that by 1970, we would be all be commuting by autogiro and living in geodesic domes.

END_OF_DOCUMENT_TOKEN_TO_BE_REPLACED

I’m forced to ask a question in response to this thesis by Josh Kraushaar: “Hillary Clinton is a near-lock for the Democratic nomination for many reasons, but among the most significant is that her challengers have minimal appeal to the party’s base of African-American voters.” …All well and good; but what’s her appeal to those voters, exactly? I mean, don’t get me wrong: I understand that, lacking an obviously good choice, many voters default to the front-runner; but what’s going to get African-American voters off of their couches and into the voting booths to vote in the primary?

This is not a trivial question: while Josh does note at the end of the essay that “if [Hillary Clinton’s] winning non-white voters in the primary by default—running against old white men with limited ties to the rising Democratic electorate—she could face a rude awakening next November” it still doesn’t mean that Clinton’s going to get enthusiastic support in the primaries. In fact, it really is arguing that Hillary Clinton can expect not to get enthusiastic support. And probably not much turnout. END_OF_DOCUMENT_TOKEN_TO_BE_REPLACED

This is an unintentionally entertaining piece: “Top Democratic attorneys are arguing before state and federal courts that district maps drawn in a handful of states violate the Voting Rights Act by improperly packing African American voters into a small number of districts, limiting their influence.”  Mostly because that was one of two times where the phrase ‘African American’ was used (the other was “The U.S. Supreme Court in March ordered a lower court to consider whether Alabama’s legislature similarly packed African American voters into state legislative districts to minimize their influence[*]”).  This is an issue because there were so many other opportunities for Reid Wilson to use the term ‘African American:’ END_OF_DOCUMENT_TOKEN_TO_BE_REPLACED

Yeah, it turns out that that they truncated the quote there:

A Washington State Patrol trooper who worked as a bodyguard for Gov. Jay Inslee was arrested in Olympia, accused of destroying evidence connected to his son’s criminal case.

END_OF_DOCUMENT_TOKEN_TO_BE_REPLACED 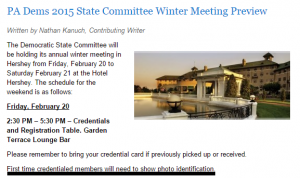 Seriously, this is important.  This is how we – and by ‘we’ I mean ‘all political partisans,’ for once – get in trouble: we decide that every new election means a straight-line advance from that moment.  Case in point: “THE EMERGING REPUBLICAN ADVANTAGE.”  Written by John B. Judis, it is not actually a horrible article. I even agree with its central thesis that the middle class is moving to the Republican column again, and that this is going to cause massive headaches to Democrats. I just don’t think that it’s going to last as long as Mr. Judis does.

Why? John Judis – who, by the way, never mentions in this article that he co-wrote a certain book called The Emerging Democratic Majority[***] – is a fairly hardcore liberal, if not progressive. And he’s got a problem, which is that while the Democratic party’s leadership is very acceptable to liberal think tanks and orgs, it’s increasingly becoming less popular among actual Democratic voters.  To someone like Mr. Judis, it is apparently inconceivable that in any fight between the two groups the think tanks might actually lose.  Which is, of course, nonsense on stilts.  To give just one example: when Nancy Pelosi fails to deliver the House again four times running in 2016 she’ll be removed from leadership even if it means holding her down and filling her suit jacket pockets with sea salt. I know that the Democratic party looks like a monolithic juggernaut from the outside, but from the inside it’s a deeply dysfunctional hot mess of competing interest groups and institutionalized incompetence, partially offset by the driving need of many people to just simply win at all costs*.

So what will happen? Well, what will happen is that (barring an asteroid strike or something**) the Republican candidate will win in 2016 – and never mind John Judis’s recommendations about what kind of Republican that candidate should be; The Emerging Democratic Majority, remember? – and a lot of people in the Democratic party will freak out. And then there will be a combination of events, mistakes, movements, and incidents that will – roughly six years or so down the road – convince the middle and working classes to give that nice Democrat a chance.  This sounds bleak, but it really isn’t: the Democratic party is long overdue for a New Left enema, and 2017 will be seen by many as an excellent chance to send the hippies packing. And, frankly, the GOP would be better off if the Democrats stopped looking like Abbie Hoffman and started looking more like Harry Truman. If for no other reason than we’d all breathe a little easier on foreign policy issues if the idea of letting the Democratic party run things for a while on that front wasn’t quite so much an imminent threat to the well-being of the Republic…

*Yeah, just like the Republican party. That’s kind of the point. I hate to break it to people, but most of our enemies are fundamentally unworthy of us, too.

**We will now pause while various folks on the Right pound the table and shout that of course the GOP will lose the next Presidential election, because [INSERT REASON HERE]. Look, I’m conceding that an asteroid strike might do the trick, OK? – And I shouldn’t. Natural disasters and calamities are not the Democrats’ friend. Ask the Democratic party of Louisiana if you don’t believe me, assuming of course you can still find a member of that party at this point.

[***Clarification on this: Judis sidles around on the topic, but he doesn’t come out and actually say You know that book that I wrote, that made my career, and that you can still get on Kindle for more than five bucks?  Yeah, that book was absolute nonsense and you should never, ever read it. It’s useless as a predictive model, so nobody take it seriously. I mean, I understand why he didn’t put it quite that way, but still.]

I mention this solely because this article (H/T: Hot Air Headlines) seems to think that former Virginia Senator Jim Webb has any option besides running for President, and ultimately losing even the nomination, as a Democrat.  …He does not.  Either party will accept a convert, readily enough: many people have honorably switched political affiliations over the years, including myself.  But to yo-yo between the parties is pretty much considered to at least suggest a basic weakness in one’s character.  Indecision at best; opportunism at worst.  Neither is thought of as being evidence of Presidential material.

Besides, he’ll look better among the Democrats anyway.  Over there the one-term, undistinguished, nonproductive, and generally ineffectual Senators can really shine.  If Webb tried to run in our primaries all the two-term governors and firebrand Senators would eat his liver and lights – and if Jim Webb doesn’t realize that by now, then I heartily encourage him to try to run in my party’s primary.  The sight of his destruction would be pleasing unto all our eyes…