I do see one for Ted Cruz; in fact, a quite doable one.  But after tonight, he and Marco Rubio need to come to an agreement (one where Rubio makes the best deal that he can).  If they do not, then you should probably get used to the idea that political discussion on this website will be coming to an abrupt end. Because I don’t care if I’m the only person to actually goes through with this in the end: I will not vote for, or support, Donald Trump*.

PS: John Kasich has even less excuse to stick around. Michigan was a must-get state; he came in third.

*Save your breath and your pixels.

Preliminary results suggest that it’s gonna be Democrat John Bel Edwards as Governor and Republican Billy Nungresser as Lt. Governor in Louisiana.  Who had that in the pool? – Because that possibility wasn’t mentioned, much.

Gonna be some special spinning on this one, folks. For myself, I wonder if David Vitter will take the hint, when it comes to his next re-election race? Guess we’ll see*…

*Now watch him win after all, just to spite us.

I’m not really sure why the Hill sounds so surprised, here: “Republican Senate incumbents look to be largely free of tough primary challenges by Tea Party candidates that could complicate the party’s efforts to retain the uppwer [sic] chamber during the pivotal 2016 election.”  We have 24 seats at stake in the next election, which is also a Presidential election. As the Hill admits, there are two open seats that are tempting prospects for conservative activists (three, if Vitter wins the governorship*); but what the Hill doesn’t quite bring up is that there aren’t that many Senators up this cycle that REALLY infuriate grassroots activists.  I mean, yes: everybody grinds their teeth over John McCain. But he is probably the only nationally recognized galloping disaster of ours this cycle.

At least, for right now.  Ask me again in March.  Then again, in March we’ll be smack dab in the middle of the Presidential election cycle, and a lot of activists are going to be understandably fixated on that. So maybe ask me in 2017? …No, wait, too late then.  Maybe just don’t ask me at all… no, that doesn’t even make any sense.

*I am not about to say that he can’t.

This is seriously bad news: Alan Grayson raised only $743K and has $252K cash on hand. How does he expect to beat Patrick Murphy for the Florida Senate Democratic nomination, when Murphy raised $1.5M, and has $3.5M COH? – And the polling isn’t so hot, either: sure, PPP has him ahead… but it’s PPP.

…What can I say? I’d rather have Alan Grayson conceding on Election Night than Patrick Murphy. Having Patrick Murphy lose is just business; there’s nothing personal there. But Grayson? Yeah, Grayson makes it a little personal for us.

And it’s not even implausible.

It's not the most likely outcome, but I agree w/ @ForecasterEnten: Jindal still has a real shot to win Iowa. http://t.co/gUxcWwgFk6

Which is not to say that it’s likely, either. Basically, it comes down to how much favorability ratings matter in the Iowa race: Bobby Jindal is well-liked in that state, and if Ben Carson and/or Carly Fiorina don’t catch fire with Iowa caucus-goers then Jindal stands a chance of getting an upset win, or at least a second-place finish. …And there are at least three assumptions in that sentence. Possibly five. So, it’s a possibility, but don’t bet anything that you can’t bear to lose on the outcome either way.

I’m only putting this poll up for malice-aforethought reasons.

Because obviously any one poll is meaningless. But, hey: it’s almost October, and the Democratic party still hasn’t gotten its primary together, either. It’s remarkably failed to do so, in fact.  And even if I don’t take this poll all that seriously, you can bet that people are walking quietly and not causing any aggro over at Team Clinton HQ today… 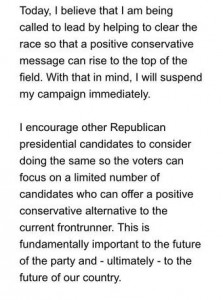 END_OF_DOCUMENT_TOKEN_TO_BE_REPLACED

The wagons are being circled: “Democratic National Committee (DNC) Chairwoman Debbie Wasserman Schultz is closing the door on adding more Democratic presidential debates, and said a controversial clause penalizing candidates for participating in unsanctioned debates would stand.” The number will stay at 6, and never mind the complaints from inside the party. No, really, the Democratic leadership is determined to never mind them.

Before we go any further: that Hill article noted that there were two dozen or so primary debates in 2008, which does admittedly sound a bit high. Six, on the hand, is… well, if you weren’t really expecting to have a contested primary then I suppose six would have seemed like plenty. As it stands right now, though, the Democrats are perilously close to having a contested primary despite the fact that their only alternatives to Hillary Clinton are currently Bernie Sanders and Martin O’Malley. As a former Democrat myself, the idea of that is giving me sympathy heartburn despite the fact that I want to see such a glorious trainwreck happen. END_OF_DOCUMENT_TOKEN_TO_BE_REPLACED

(Via @YR_AlyssaDC) Nah, this isn’t creepy at all.

“A women’s chorus called Voices from the Heart replaced the name “Jesus” with “Hillary” at a campaign rally in Portsmouth, New Hampshire, on Saturday.”

…but here’s the funny part: it’s kind of creepy for completely different reasons than you might think! Yes, replacing ‘Jesus’ with ‘Hillary Clinton’ is in itself more than faintly alarming. But it gets better! …For given values of better.
END_OF_DOCUMENT_TOKEN_TO_BE_REPLACED