“Republicans cannot defeat Democratic incumbent Senators.”  This was, in some ways, the single most obnoxious meme that Democrats promulgated in the last two, three election cycles, largely because it was based on an unusually facetious argument.  Basically, the idea was that Democrats had a skill set and resources that made their incumbent Senators bulletproof; there was no way that a Republican should challenge one, so the best hope the GOP had was to wait until a Democrat died or retired or something.  This was, of course, flaming nonsense on stilts, for three reasons:

END_OF_DOCUMENT_TOKEN_TO_BE_REPLACED

I honestly and truly do not like to tell people that the best thing that they can do for the Republic is not to vote.

…if Joe Biden’s argument here swayed you – if the thought that Mitt Romney, if elected, would try to:

– and you thought that this was all a bad thing; then I will submit to you that in voting for Obama-Biden you made the single most foolish, uninformed, and downright dangerous Presidential vote that you are likely to make in your life.  And while I absolutely respect the right of you to exercise your franchise – better men and women than either  you or I died to protect that right – it is my humble request that you refrain from damaging the country that we both love in the future.  I have kids, you see. I don’t want to see them worse off than I was, at their age.

This is a true thing.

The world doesn’t end until the Batman says it does.

Let’s see what shiny object the Obama administration comes up with TODAY to try to distract people from both of those inconvenient truths.  I’m betting Full Metal Mormonism: nothing like a little casual religious bigotry to keep up the Online Left’s spirits as the hammer continues to descend.

As I think that I’ve noted before, I’m not really planning to see the movie; I just don’t like political documentaries, or indeed most genres that don’t involve Jerry Bruckheimer*.  But don’t let my parochial worldview stop you.  If for no other reason than because Al Gore’s ‘documentary’ being surpassed will cause the weeping and wailing and gnashing of teeth.

*I am not ashamed.  This is who I am.  I like explosions and big starships and magical fireballs and slo-mo martial arts badassery and gun fu and bad jokes and car chases and superheros throwing other superheros through buildings and all the rest of it.

So, via Jammie Wearing Fools comes this refreshing article where members of the Media whine about how awful this Presidential campaign is, and how they hate everything about it. So why is it refreshing? Well, aside from Jeff Emanuel’s take on the subject, you should also look at sample articles written by the people who were quoted and/or referenced in it: END_OF_DOCUMENT_TOKEN_TO_BE_REPLACED

So, to review the bidding: when Romney picked Ryan, Establishment Democrats (and their liberal lackeys) cackled in response that the GOP would now have to hide from the entire state of Florida, thanks to Mediscare.  No way that they were going to go all-in, there. 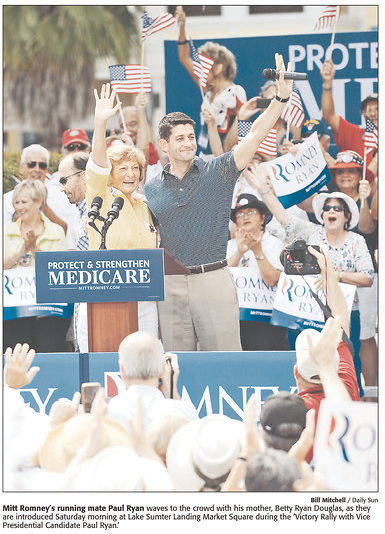 END_OF_DOCUMENT_TOKEN_TO_BE_REPLACED

He says that it’s not likely to happen, and I agree.

One might have expected that two years after Republicans picked up 63 House seats—the biggest gain in a midterm election since 1938—Democrats would be on track to win back a boatload of those districts that the GOP didn’t have much business winning in the first place. But a little more than four months out from the election, the tides seem about as neutral as they can be. Both parties have surprisingly comparable levels of exposure, largely because of redistricting. The relatively calm surface of this year’s waters belies a lot of offsetting tumult and change underneath. But for House Republicans, who hold a 25-seat majority, a status quo election producing minimal net change would be good news.

I’ve been doing this since 2002; 2006 was probably my first real pay-attention-to-Congress election.  I’ve seen three wave elections, increasingly from the inside.  This… does not feel like one.  It feels like what Charlie said: the waters are still.  END_OF_DOCUMENT_TOKEN_TO_BE_REPLACED

The New York Times reported this morning that the combined raised total for Romney and the RNC was $40.1 million in April, with Romney having $61.4 million in the bank: in comparison, Obama/the DNC raised $43.6 million.  Barack Obama’s own cash on hand for April – it was $104.1 million at the end of March – and we probably won’t be told it until the Sunday deadline, or possibly a little later than that. Though, to be fair, Romney and the RNC haven’t submitted their latest fundraising reports to the FEC, either.

Also: while I give points to the NYT for mentioning that this was a significant jump from Romney’s March haul of $12.6 million, they might have kept comparing apples-to-apples and included the RNC’s March fundraising total ($13.7 million). Or noted that the Democrats’ $43.6 million number for April represents a drop from March’s $53 million.  Then again, I suppose that there’s a narrative in place. END_OF_DOCUMENT_TOKEN_TO_BE_REPLACED

It’s funny, really.  Somebody like Mark Halperin sees this:

Barack Obama’s decision to base his re-election campaign outside of Washington seems to be working pretty darn well. The campaign’s massive, high-rise headquarters in Chicago’s Loop achieves a fine balance between 2008’s hip-casual dorm room (there’s a Ping-Pong table and cheeky homemade signage) and 2012’s systematized Death Star (there are more employees than I have ever seen in a political campaign, with work stations subdivided as ever more employees are added). The place hums from early morning until late at night, designed for maximum efficiency and manifest focus.