Organization. That’s what you need to have. Organization, and infrastructure.  The RNC is currently testing its recent work on both: “The RNC says it now has over 150 paid staff and 10,000 campaign volunteers scattered in key electoral battlegrounds and other states. Now, the national party wants to find out if its investment in manpower, technology and strategy development pays off in the form of a well-oiled political machine.”

I’m noting this because I want to get on the record: do not panic if the rocket blows up on the launch pad. The RNC is testing this stuff out a year early precisely because it might blow up. Negative data is great data. And you want to do this early In 2012 Team Romney went live with its infamous GOTV platform ORCA on Election Day. Guess what happened? That’s right, it blew up on the launching pad.  With Team Romney inside of it.

PS: Looking at the article, the specific states targeted appear to be specific test beds for specific strategies. I wouldn’t read too much into what states got excluded at this particular stage of the process. For all we know, the next wave will test stuff in safe Democratic or Republican states, or look at other battlefield states, or just go national and see how things scale. If you know what you’re doing, how long it’s going to take, and how much it’s going to cost, it’s not exactly R&D, is it?

I am incredibly humbled and honored to have the opportunity to serve as RNC Chairman for a third term.

After the 2014 cycle – which hopefully fixed everything that went wrong during the 2012 cycle, or at least fixed everything that could be fixed by the RNC* – well, if Reince Priebus still wanted the job he was going to get it. He still wanted the job. So he got it. He’s a good guy; I like him. And I bloody well expect him to make sure we win in 2016, too.

*I suggest that we don’t let the campaigns run the GOTV/data stuff on their own anymore. Let the national committees do that.

This probably shouldn’t surprise anybody.

We had a great election cycle. We had, in fact, an election cycle where we exceeded expectations on pretty much every front. It’s reasonable to think that people may be unwilling to mess with that when there’s a Presidential election coming up.

END_OF_DOCUMENT_TOKEN_TO_BE_REPLACED

I rarely give money to politicians or political committees: frankly – and false modesty be damned – my in-kind contributions are more valuable to the Republican party than my cash contributions would be.  But I absolutely had to have these socks. 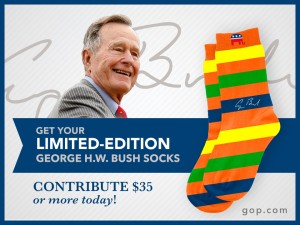 Mind you, the RNC should have had a widget for this already. But that’s a quibble.

2012 burned just a few too many people just a bit too badly. Byron York:

…the party fully intends to change its debate structure. The reason goes beyond Republicans’ belief that holding 20-plus debates, as in 2011-2012, provides too much opportunity for gaffes and intra-party bloodletting. It also stems from GOP dissatisfaction with debates in which the moderators don’t seem to understand the premises of modern conservatism and engage in hostile or clueless questioning — or out-of-the-blue provocations like former Clinton operative George Stephanopoulos’ queries about contraception at a 2012 debate in New Hampshire.

Just what the RNC will do is not yet clear. But it is serious. Look for real change to occur before Republican presidential candidates meet again.

I should note, by the way, that this has to be a dynamic process. We’re going to have to go in and check the system every four years.

Whatever cuts down the number of debates, frankly.

The Republican National Committee unanimously passed a resolution here Friday to not partner with NBC or CNN on 2016 primary debates if they air Hillary Clinton projects.

RNC Chairman Reince Priebus got an extended standing ovation from cheering state chairmen during the party’s summer meeting for spearheading the push.

“We’re done putting up with this nonsense,” he said. “CNN and NBC will just have to watch on their competitors’ network … The media overplayed their hand this time.”

I’d advocate Thunderdome if I thought that it would help.  Seriously, though: it needs to be made clear to all of the serious candidates that what Reince Priebus and the RNC is doing resonates with a very large swath of the Republican party.  The Media went gunning for the GOP in 2012 with those debates.  They did everything that they could – which turned out to be a lot – to savage our candidates.  The Media, in fact, hates the Republican party, and wants us to die in a fire.   END_OF_DOCUMENT_TOKEN_TO_BE_REPLACED

The head of the Republican Party threatened Monday to cut out CNN and NBC from the GOP presidential primary debates if the networks do not shelve their plans to air lengthy features on Hillary Clinton — who is widely expected to be a Democratic candidate in the 2016 election.

Republican National Committee Chairman Reince Priebus accused both networks of trying to put “a thumb on the scales” of the 2016 race with programming he claimed would be tantamount to an “in-kind donation” to the Clinton campaign.

In a written statement, Priebus said if the networks don’t meet his demands, he will seek a “binding vote” at the upcoming Aug. 14 RNC meeting declaring that the party “will neither partner with these networks in 2016 primary debates nor sanction primary debates they sponsor.”

I happen to have a real problem with Priebus’s decision, here. It’s a touch squishy: I mean, the chairman seems to be suggesting that he’d still let the RNC credential NBC/CNN flunkies if their parent companies don’t abandon their brave new roles as Hillary ’16 harbingers. This is no time to go wobbly.

PS: You may safely assume that I – and a lot of my compatriots – will not be unhappy to see our 2016 debate calendar hacked down to something that’s actually useful. By any means necessary.