As one of my colleagues (who should get a personal site, so that I may not be able to steal stuff like this) notes, the nice thing about the Internet is that you can have a new Greatest. Thing. EVAR. every day.

If there is a way to make this combination more synergistically awesome, it is not readily apparent to modern science. 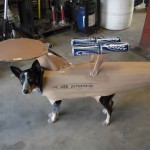 PS: Dammit, in an alternate universe not that far diverged from this one I’d be able to make all sorts of Star Trek-themed Christopher Marlowe

puns.  Would it have killed the writers to reference somebody besides Shakespeare, every so often?

No, not from me: but somebody will look at this and think of you. 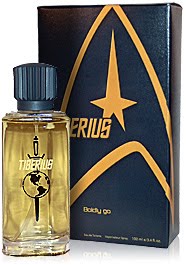 (Via Galley Slaves, via @BrianFaughnan.)

Don’t try to deny it. And extra points for the logo.

For a given value of ‘little.’ A taste:

V’Ger
In Star Trek: The Motion Picture, a Voyager space probe gets sucked into a black hole and survives (GAAAAH), and is discovered by denizens of a machine planet who think the logical thing to do is to take a bus-size machine with the processing power of a couple of Speak and Spells and upgrade it to a spaceship the size of small moon, wrap that in an energy field the size of a solar system, and then send it merrily on its way. This is like you assisting a brain-damaged raccoon trapped on a suburban traffic island by giving him Ecuador.

(Via Fark Geek) They get better. No discussion of modified tachyon bursts, but the Star Trek

holodeck gets its nod.

I wonder if it’ll hit the same ones that I would have; particularly, how every major problem in the Star Trek

universe can be solved by a modified tachyon burst emitted through the main deflector grid.

Anyway, via Instapundit comes “John Scalzi’s Guide to the Most Epic FAILs in Star Wars Design.” I like this one the best, because it’s one that I didn’t think of ahead of time, but was bloody obvious once it was pointed out to me:

Lightsabers
Yes, I know, I want one too. But I tell you what: I want one with a hand guard. Otherwise every lightsaber battle would consist of sabers clashing and then their owners sliding as quickly as possible down the shaft to lop off their opponent’s fingers. You say: Lightsabers can slice through anything but another lightsaber, so what are you going to make a hand guard out of? I say: Dude, if you have the technology to make a lightsaber, you have the technology to make a light hand guard.

It being Wednesday, we say good-bye – until November17th – to Star Trek

, which is otherwise known as A Time Travel Movie That Didn’t Suck.

Well, many of them do.

It being Wednesday, we say good-bye to Grosse Pointe Blank

For now I am trapped within it.  Curse you, Ace of Spades HQ.  I cannot spend the next three days reading that site.

PS: AoSHQ linked to the “Spock’s Brain” review: I personally would have gone with “And the Children Shall Lead.”  Either way, I can’t imagine why Agony Booth thought advertising the complete third season of Star Trek DVDs would work. The whole shebang

, on the other hand…

As God is my witness, they are. First off, here’s a mashup via At The Point of a Gun*…

…that demonstrates that even Holy Grail

can be improved with Star Trek

; and then there’s this: 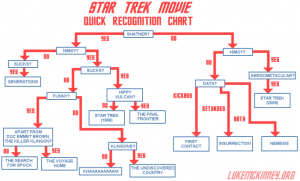 …from… well, I don’t actually know who. It got emailed to me. Go figure.

[UPDATE]: Duh, it was right there on the image. Luke Writes. You Read.

*And check out this video he found, while you’re there.

I’ve mentioned it before.

Anyway, it’s telling about the quality of the recent Star Trek

movie that there’s been a number of people wondering how this version of the crew is going to handle meeting Khan. I’d actually prefer that they don’t – watch Space Seed again, then Wrath of Khan

, and tell me how you can fairly expect somebody to live up to Ricardo Montalban – but it tells you something that the fans have relaxed about the entire prospect.

Me, I want to see how they handle Mirror, Mirror.  I have high expectations for Simon Pegg’s performance in that one.