I have a radical idea about this.

… a team of archaeologists and scientists from Egypt’s money hungry Ministry of Antiquities will crack the menacing-looking thing open despite the entirety of the internet knowing that it’s a terrible idea. “We are hoping this tomb may belong to one of the high dignitaries of the period,” Ayman Ashmawy, the head of Egypt’s Ministry of Antiquities said in a statement, his pupils turning into dollar signs as he eyes the sarcophagus and licks his lips. “The alabaster head is likely that of a nobleman in Alexandria. When we open the sarcophagus, we hope to find objects inside that are intact, which will help us to identify this person and their position.”

END_OF_DOCUMENT_TOKEN_TO_BE_REPLACED

I cannot see how this could possibly end badly.

Egypt’s top prosecutor on Sunday referred ousted Islamist President Mohammed Morsi to trial on charges of inciting the killing of opponents protesting outside his palace while he was in office, the state news agency said.

The military ousted Morsi on July 3 after millions took to the streets demanding that he step down. He’s been held incommunicado since. Despite other accusations by prosecutors, the decision Sunday is Morsi’s first referral to trial. No date was announced for the trial.

Mind you: Morsi is as guilty as sin.  I normally try to avoid opining too openly on guilt or innocence in upcoming court cases, but I feel safe to do so here because it’s a) not happening in my country’s legal jurisdiction and b) even if Morsi was innocent of inciting the killing of protestors he’ll still end up being convicted of inciting the killing of protestors. Not that that last part will prevent a backlash anyway; even though he’s guilty, Morsi will still be loudly proclaimed as being innocent by people who are looking for a half-plausible reason for dropping the match into the accelerant.

PS: Moral of the story?  Measure twice, cut once.

[UPDATE] PPS: My wife noted that this would actually be a time where the Hague or something would be useful: the case doesn’t involve Israel and it doesn’t involve America, so maybe the ICC wouldn’t be completely worthless.

OK, wait, hold on: this is not an accurate description of the situation, back then.

Watching Egypt self-immolate, I am taken back to the time when the United States was alight with bitter conflict—to December 2000 and the unresolved presidential election. Admittedly, no one was killing political opponents, and but for a “bourgeois riot” in Tallahassee, Florida, there was nothing more violent than the trading of abuse across the party-political divide. But in a country unaccustomed to electoral ambiguity, there was fear in the air: it was palpable. America was in uncharted territory. The voting was over, the count was maddeningly inconclusive, and the country was on edge, electrified and shaken, awaiting resolution. Most disconcerting of all was the sense that this perilous post-election limbo was so very un-American. This sort of thing happened in Italy, in Argentina, in India, places less serene in their political culture, more turbulent in their ways. Not in America!

END_OF_DOCUMENT_TOKEN_TO_BE_REPLACED

Danged if I know whether this would be smart, or not:

The Egyptian government […] announced it had begun deliberations on whether to ban the [Muslim] Brotherhood, a long-outlawed organization that swept to power in the country’s first democratic elections a year ago.

Such a ban — which authorities say is rooted in the group’s use of violence — would be a repeat to the decades-long power struggle between the state and the Brotherhood.

For more than a month since the July 3 military overthrow of Morsi, Brotherhood members and supporters have attacked and torched scores of police stations and churches, in retaliation. Shops and houses of Christians have also been targeted.

END_OF_DOCUMENT_TOKEN_TO_BE_REPLACED

Ain’t that a shame. END_OF_DOCUMENT_TOKEN_TO_BE_REPLACED

We will now pause for the bitter laughter of the foreign policy hawks:

The detainees were largely pro-Morsi protesters seized during clashes early Monday outside the Republican Guard headquarters. Protesters and Morsi’s Muslim Brotherhood deny any attack took place on the headquarters, saying troops opened fire on their sit-in nearby as the protesters finished dawn prayers.

Via Hot Air.  And do you know why there is laughter, and it is bitter?  It is because there is no “right” answer here.  You can choose the hardcore Islamist thugs with unpleasant gender issues who nonetheless happened to win an election; or you can choose the (at-best) endemically corrupt and definitely authoritarian military cabal who nonetheless would like to get the country out of its current death spiral.  Have fun!  END_OF_DOCUMENT_TOKEN_TO_BE_REPLACED

John F. Kerry’s credibility took on more water on the second day of his Nantucket vacation flap, as the State Department backed off its initial denial the embattled secretary of state was yachting during the Egyptian military coup — and President Obama tweeted a photo of himself kayaking in a hat, sunglasses and polo shirt.

The Herald reported yesterday that Kerry spent the Fourth of July cavorting on his island getaway even as chaos from the military’s ouster of Islamist President Mohammed Morsi rocked Egypt.

In the wake of the Herald story, a State Department spokeswoman admitted yesterday that Kerry was “briefly” aboard his $7 million luxury craft, the Isabel, on the day of the coup, after previously insisting the yacht sighting was “completely inaccurate.”

END_OF_DOCUMENT_TOKEN_TO_BE_REPLACED

Possibly arranging for a villa on the French Riviera:

“The president is no longer able to make any political decisions now and a decision has been taken to prevent leaders loyal to the current regime from traveling overseas until the General Command of the Armed Forces are finished formulating their expected statement,” it added.

That’s how these things usually end, when it’s more convenient for everyone involved that blood not run in the streets.  Which would be good.

PS: …Well, that was an incredibly counter-productive use of American soft power in order to effect change in a foreign country.

Some of the largest protests ever going on in Egypt right now and this is CNN’s front page, as of 10 PM Eastern time: 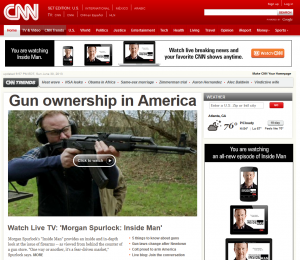 Complete with editorializing about the retail gun business.  But, not to worry: CNN does mention the protests…

END_OF_DOCUMENT_TOKEN_TO_BE_REPLACED

Tell me again how marvelous it is that we encouraged the Muslim Brotherhood to take over in Egypt: “In a dramatic policy shift, Egypt will seek to forge “tight” relations with Hezbollah, Egyptian Ambassador to Lebanon Ashraf Hamdy revealed in a candid interview published Saturday in Lebanon’s Daily Star.” Such ‘tight’ relations will presumably include Hezbollah’s right to keep getting ready for that armed conflict with Israel that Hezbollah is supposedly not REALLY getting ready for. Because, of course, nobody in the Middle East has ever preemptively decided to try to attack Israel, ever. END_OF_DOCUMENT_TOKEN_TO_BE_REPLACED