Background: The Green family (the folks who own Hobby Lobby) plans to spend some of their money on building a Bible Museum in  [DC.  My bad.] – actually, they’ve been planning to do this for some time. Why? Because they think that the Bible is, you know, the word of God; and they intend to promote interest through it via the avenue of a privately-owned, yet well-situated, museum.  And hoo, boy, does that get the usual suspects in full meltdown mode:

Such sentiments have stirred fears about the museum among groups such as the Freedom From Religion Foundation, which promotes separation between church and state. “I think they are a great threat,” said Annie Laurie Gaylor, a co-president of the group, which is based in Madison, Wis. “My instincts would tell me that they are choosing Washington, D.C., because they intend to influence Congress.”

Scheduled to open in 2017, the yet-to-be-named museum would welcome people of all faiths and include rare Torahs as well as historic Bibles.

END_OF_DOCUMENT_TOKEN_TO_BE_REPLACED

I like this Megan McArdle post on the clashing ideological worldviews on Hobby Lobby, but I object to her suggestion that the Left and the Right “misunderstood each other so profoundly — and continue to do so even after all the screaming.”  That’s not even remotely true: I (and most of the rest of the Right) understood the Left’s position on the case from the beginning. I just rejected it, because it was stupid; simplistic; and frankly designed to produce Two-Minute Hates on cue.  We in this business have a bad habit sometimes of assuming that there are, broadly speaking, at least two correct answers to any policy problem (if we had three viable political parties, we’d assume that there were three, and so on).

That’s not… always true.  A lot of times, there is a right answer, and a wrong answer.  In this particular case, the Left had the wrong answer: the Right had the rig… err, ‘correct’ answer; and that is the end of it.

END_OF_DOCUMENT_TOKEN_TO_BE_REPLACED

This is still the best encapsulation of the online showdown over the Hobby Lobby decision that I’ve seen:

"Get your politics out of my bedroom!" "Not a problem. I'm just going to grab my wallet before I leave." "The wallet stays, bigot."

…I’m not even sure if the Online Left truly groks the weird rhetorical place that they’ve ended up in, there.

In the course of a not-entirely-unfair piece by Time magazine that makes it clear that the Obama administration has decided to play partisan politics with the Hobby Lobby decision*, the magazine article noted something interesting.  At issue is the centerpiece of the ruling – that companies are not actually required to violate their owners’ religious principles by paying for abortifacients – and the funny thing here is that the government never really had to seek a ruling in the first place:

Legal observers say it would not be difficult for the Obama Administration to resolve the situation unilaterally. The Department of Health and Human Services has already taken unilateral executive action to ensure that women employed by religious nonprofits get contraception coverage in cases where the employer declines to pay. “There was nothing in the statute that specifically allowed them to create the exemption for non-profit organizations so I don’t see why they couldn’t extend that to for-profit corporations,” said Timothy Jost, a law professor at Washington and Lee University and an expert on the Affordable Care Act’s regulations. “I don’t know why they couldn’t do it themselves.”

Two answers to that: first, then the Democrats couldn’t fundraise on the issue. Second, if the administration decided to fund procedures that an extremely large swath of the population considers to be abortifacients then they’d be in for several more exquisitely painful months in the public disapproval barrel.  Better by far to send it to Congress, let it die there, then blame it all on the Republicans.  And, of course, fundraise on the issue. END_OF_DOCUMENT_TOKEN_TO_BE_REPLACED

Seriously, we may have to start an affirmative action program to force academics and the media to take in actual conservatives and religious people, just so that the Left can learn to appreciate the Other.

PS: You cannot force a clear-cut First Amendment case to be about whatever the hell the Democrats need this week to avoid an electoral blowout. Reality doesn’t work that way. 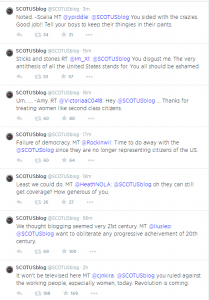 END_OF_DOCUMENT_TOKEN_TO_BE_REPLACED

And that’s it for right now.  Gotta go clean the living room.

I came perilously close to writing this post in a white-hot fury (for reasons only indirectly related to the case), but wrath is a counter-productive emotion in this particular situation.  Suffice it to say that the people that run Hobby Lobby are adamant that they not be required to pay for drugs that they consider to be abortifacients; and while I’m personally sorry if this bothers progressives I am equally adamant that progressives get it through their collective skulls that they are not the sole arbiters of morality in this country. They are not, in fact, even the primary arbiters; and for what I consider to be very good reasons.

Rant over.  Enjoy your Sunday morning.

As I opened up the art packaging she murmured And what interesting thing have you brought me to be framed today*?  …I get the impression that I bring in some of the more unusual items for framing.

This pleases me. Particularly since by now she feels free to tell me when I’ve picked out the wrong kind of frame and/or matting for a particular picture. Good customer service is key for modern retail…

*This, for the curious. It’ll take a few days to finish framing, though: signed prints take a certain amount of careful handling.

Not unexpected, but not before time, either.

The U.S. Supreme Court today agreed to review the lawsuit filed by Hobby Lobby against the federal government over the Obamacare mandate that employers provide contraceptive coverage in their health plans.

Hobby Lobby, which is owned by an Oklahoma City family with strong Christian beliefs, says a 1993 law, the Religious Freedom Restoration Act, protects the company from the mandate. The company is particularly opposed to paying for coverage that includes the morning after pill.