So, Dumbo has Michael Keaton, Danny Devito, and Tim Burton.

END_OF_DOCUMENT_TOKEN_TO_BE_REPLACED

…I’d be a lot more nerdrage about it if I actually had a good candidate for Batman.  It’s a hard role to cast.

PPS: You know who else is AWESOME?  Richard Dreyfuss. Via CNN:

You read for a part, you feel good about it, you feel confident, then they cast Ben Affleck.

Via Do Gooder Press.  I have a complex reaction to Batman: The Dark Knight Returns.  On the one hand, it’s brilliant.  On the other hand… well, the Internet has had many the discussion about whether this and/or Watchmen permanently sent the comic book genre spiraling down into an existential pit of horror, despair, and absurd poses.

His point that iconic superhero CEOs inherit wealth, while iconic supervillian CEOs generally earn it from scratch is interesting (it’s also interesting that Bruce Wayne is both the most competent CEO and the closest-to-evil superhero on Julian’s list); but I wonder if he’s reaching too far, or too deeply, in his explanation why.  Could it simply be that comic artists and writers generally don’t like it that they have to at least sometimes have fights with the business/management side of the comic book companies that they write for?  That could easily bleed over into their creative output…

…is kind of goofball, right?  I mean, I got no quarrel with Randy’s take on the French Muslim Batman of Paris (sounds like a modern art painting title), but the idea of franchising the Caped Crusader seems a bit… weird.

Mind you, I don’t currently buy Batman comics, so I can probably be safely ignored anyway. END_OF_DOCUMENT_TOKEN_TO_BE_REPLACED

As my wife noted, this works scarily well.

This… got sent to me, I think.  Anyway, I actually thought about not posting this for natsec reasons, but I figure that the bat is out of the bag. 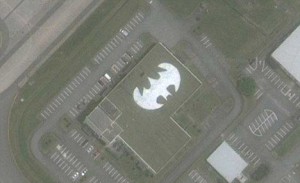 Besides, it’s kind of hard to argue that someone is trying to hide something when they happened to have painted A BIG WHITE BAT SILHOUETTE on the roof.

From Cracked.com, of course:

[The villains of Gotham] keep charging at Batman one at a time, even with 13 of their cohorts lying on the ground with broken collar bones. We’re not suggesting they just walk away and give up their life of crime–we understand that anybody who’s signed up to be a henchman for The Joker probably isn’t qualified to do anything else. But maybe you should fall back and try a new strategy. You’re not going to be the first guy in history to punch Batman into submission. Leave until you can come back with some dogs.

Of course, Batman will have a plan for that.

Most exceedingly wroth. And I cannot say that I blame them.