Marvelous: “One of the most serious potential breaches of national security identified so far by the intelligence community inside Hillary Rodham Clinton’s private emails involves the relaying of classified information concerning the movement of North Korean nuclear assets, which was obtained from spy satellites.”  Admittedly, the Chinese probably already knew about the aforementioned movement of those nuclear assets, given that North Korea is their particular little embarrassment/headache. But now the Chinese know what we know about North Korean nuclear asset movements; worse, they have a somewhat better idea of what we don’t know about North Korean nuclear asset movements. Lucky break that we’re not currently fighting a proxy war with the ChiComs, huh? – Which is something that we’ve done twice, within living memory.

I mean, can we not pretend, here? This was an epic screw-up by the former Secretary of State. It is the kind of screw-up that the GOP can and will viciously and cheerfully exploit in the general election, should Hillary Clinton be the nominee. And before you ask ‘So what?’ let me remind you that in every election we see a certain number of defectors from one party to the other.  I suspect that, should Hillary Clinton be the nominee, the percentage of Republican defectors will end up being quite remarkably small.

I got nothing that can top this for sheer insanity, sorry.

Hillary to reporter who asked if her server had been wiped: “Like with a cloth or something?” http://t.co/nvegBcCKLn pic.twitter.com/vC9xkfkycp

END_OF_DOCUMENT_TOKEN_TO_BE_REPLACED

Well, isn’t this a Maalox moment for the Democratic party leadership.

As pressure builds on Hillary Clinton to explain her official use of personal email while serving as secretary of state, she faced new complications Tuesday. It was disclosed her top aides are being drawn into a burgeoning federal inquiry and that two emails on her private account have been classified as “Top Secret.”

The inspector general for the Intelligence Community notified senior members of Congress that two of four classified emails discovered on the server Clinton maintained at her New York home contained material deemed to be in one of the highest security classifications – more sensitive than previously known.

END_OF_DOCUMENT_TOKEN_TO_BE_REPLACED

So, you’ve probably heard by now of the infamous, frothing, subtly alarming extremist emails that the Democrats have been sending out* trying to troll for cash.  In between bouts of being disquieted and amused, I asked myself: Why are they doing it? Clearly there’s a reason. So I reached out to a buddy of mine on Twitter – Rick Wilson, who does actual** campaign work – to get some insider insight.  Here’s our conversation:

END_OF_DOCUMENT_TOKEN_TO_BE_REPLACED 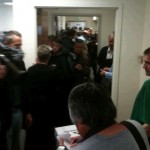 Never mind on that Part 2 of the Weinergate endgame that I promised quite yet: via Ace comes this report from Big Journalism on Rep. Anthony Weiner that “suggests that the Brooklyn- and Queens-based representative and the young woman in question were involved in an online, consensual relationship involving the mutual exchange of intimate photographs.” They’ll be dribbling out their evidence for this suggestion over the day, and any hope by the Left that this will not be covered by the media will probably be neatly scuppered by this promise: “we will not be releasing all of the material because some of it is of an extreme, graphic nature.”