END_OF_DOCUMENT_TOKEN_TO_BE_REPLACED

Background: Patterico’s Pontifications and Ace of Spades were blessed, if that’s the right word (it’s not), with an email from ‘Alicia Pain’ that could either be read as a warning to lay off digging in further on the Antony Weiner / Betty / Veronica direct messages story*, or a threat if either continued to do so.  Ace got more out of the author of the email than Patterico did, mostly by responding and using bad language until s/he slipped up and claimed to be working for a client.

Anyway, speaking as a professional, more or less (and for a change)… absent further data, hard to tell.  The email address is throwaway and both Patterico and Ace make their email available but not easily accessible (they’re both Old School), which argues against the ‘random lunatic spouting off’ theory; however, the Internet is full of people who like to make grandiose claims about what they do for a living, what shadowy networks of powerful people they belong to**, and how other people should listen to them when they’re only trying to help.  None of the people really associated with that name on the Internet already seem to be a good fit for either possibility, so I suggest waiting for more info.

END_OF_DOCUMENT_TOKEN_TO_BE_REPLACED

And why you should care.

It all started when I decided to drink some of the pain of the Activist Left.

I was reading Mickey Kaus – who himself is no slouch when it comes to despising the activists that have essentially destroyed his current and my former party – when he linked to this in-retrospect-unfortunate Tweet by Kos referencing dKos’ rather embarrassingly wrong conspiracy theory about what was going on with Anthony Weiner and pictures of his genitalia*. Tasty, tasty spinning of what was in the end a straightforward, if sordid situation involving a Congressman with too much of a sense of entitlement… but I kind of wanted to see some more wrongheadedness. I freely admit it: there is schadenfreude involved here; I’m not yet a Buddha.

Fortunately, thanks to the miracle of tags you can do things like search for related stories, so I clicked on the #twitterhoax tag. No entries show up. So I scroll down to the search function, punch in ‘twitterhoax,’ and discover that ‘#twitterhoax’ brings back 14 entries, and ‘twitterhoax‘ brings back 1. But none of the ‘#twitterhoax’ entries can actually be called up, while the ‘twitterhoax’ one can be. In other words, an entire set of (embarrassingly wrong) stories just happen to have had their tags not working. END_OF_DOCUMENT_TOKEN_TO_BE_REPLACED 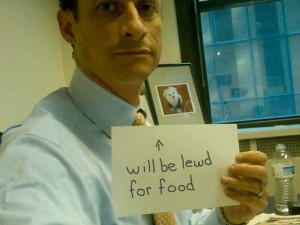 Because, really, at this point you have nothing else left. END_OF_DOCUMENT_TOKEN_TO_BE_REPLACED

Anyway, it got so bad that they had to send the aides out of the room, lest they gossip and leak – which didn’t help, of course.  It never does.  What does help in these cases is clear-headed pragmatism and the moral courage to accept a bit of pain now to avoid more pain later… which is why the Democrats are still in this mess (they haven’t even stripped this guy of his committees yet!), because their leadership is apparently incapable of either.  It’s enough to make an outside observer want to give two for flinching. END_OF_DOCUMENT_TOKEN_TO_BE_REPLACED

Well, it’s also the funniest thing! The Delaware police are now looking into Anthony Weiner’s… private digital conversations with a teenager! Which Weiner is totally admitting happening! Just like Weiner admitted to everything else that Andrew claimed that Weiner did, and that you tried to dismiss! END_OF_DOCUMENT_TOKEN_TO_BE_REPLACED

Megan McArdle, on GUESS WHO*?

I’m not saying that we should spend weeks and months torturing the guy–that’s up to his wife, if she wants to.  But I don’t think that the media should have hushed up something that was, um, very public . . . or that it’s somehow out of bounds to say that, unless she was really enthusiastically supporting his desire to text photos of his body parts all across our fair land, this was a really remarkably sh[*]tty thing to do to his wife.

END_OF_DOCUMENT_TOKEN_TO_BE_REPLACED

Never forget: if you are a Republican, than this man hates you…

…he routinely lies about you and your motivations; and he wishes you to die in a fire.  Obviously, you don’t have to respond in kind; in fact, I would recommend that you purge yourself of any hate that you might still harbor towards Anthony Weiner.  You can even feel pity.

But he chose his path.

Let me summarize the positions of the people in this clip:

END_OF_DOCUMENT_TOKEN_TO_BE_REPLACED

I know, I know: you have fatigue.  I have fatigue.  But marvel none the less, my droogies: the Left used to love Anthony Weiner, until he fell to earth.  But now? He’s just a “somewhat holier-than-thou liberal” who has “never actually put much effort into his congressional work;” also, “an ultra-ambitious showman with a knack for generating publicity but little interest in the nuts-and-bolts work that comes with serving in Congress.” And apparently Weiner’s got “performer’s instincts” but not ones that make him want to be “a significant player in Congress.”

All of which I agree with; I’m just shocked that Salon is saying it in the first place… oh.  Right.  The Democrats have an Eleventh Commandment, too: