Being drawn by Guilded Age alumnus Ericka Henderson.  I gotta admit, I kind of want a Squirrel Girl movie.  By that I mean that I want one, but I didn’t want to push it previously.  I mean, she’s a fun comic character and everything, but is Marvel really going to be able to make money off of that? 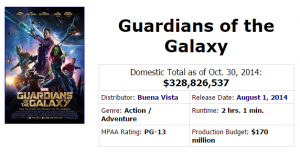 I guess that it all depends on how GOOD Marvel thinks that it is, then.  Maybe they can’t make a successful Squirrel Girl movie.  Maybe it’s more of a  DC idea…

Interesting point here from Reason on the leaked Marvel Age of Ultron trailer:

The trailer wasn’t supposed to be released this week at all. Marvel had originally planned to release the trailer next Tuesday, in conjunction with a new episode of Agents of S.H.I.E.L.D, a TV show with close ties to Marvel’s ever-expanding Avengers movie universe. After a low-resolution version of the trailer leaked, some copies were pulled at the request of Disney, which owns Marvel.

…within about two hours of the leaked version hitting the web, Marvel went ahead and posted the official version. So much for carefully stage-managed corporate PR, eh? But this is one of the reasons why Marvel is doing such great business these days. They’re not fighting the fans, not trying to control the crowd. The company is accepting the reality of the Internet—that a leak can’t really be contained—and giving fans what they want.

END_OF_DOCUMENT_TOKEN_TO_BE_REPLACED

But I do not, in fact, have to.  And I don’t particularly like being called a racist by your comic book writers.

(Reminded of this by AoSHQ)

For four billion dollars, or about eight or so Iron Mans.

Which is moderately geeky of me, and hopefully a sufficient warning to DC Comics.

Guess it’s settled whether there’s money in that franchise, huh?

According to the Associated Press, a lawsuit was filed yesterday in a Manhattan federal court on behalf of four shareholders of Stan Lee Media, Inc. against Stan Lee, his partner Arthur Lieberman, his wife Joan Clayton, Marvel Entertainment, Inc. and producer Avi Arad. The four unnamed shareholders are seeking more then $750 million in profits from films based on Marvel characters, including “Spider-Man,” “X-Men” and “Iron Man.”

While details are still trickling in regarding specifics to the case, the AP reports that the lawsuit claims profits from Lee’s comic creations belong to the company after emerging from bankruptcy in 2006. The suit claims Lee and the others named in the proceedings ignored the company and shareholder’s interests.

I came across this while looking up Watchmen info – see Moe succumb to the Fanboy side of the Force! Succumb, Moe, succumb! – and while I figure that this will probably get settled it’s still a little interesting. I mean, sure, between the Spiderman

movies and the X-Men

films and the entire Iron Man “my-God-it’s-full-of-Tony-Starks” thing Marvel must be a hot commodity right now. Still, 750 million’s nothing to sneeze at – even if they’re hoping to “only” score a 100 million or so.

PS: Watchmen comes out in March; Star Trek’s still up for May.  And I don’t know what’s going to be the big summer must-see movies, yet.