Found here. Short version: OSU dropped the E-bomb on a bunch of college protesters. There’s a video: and you can almost see the tone shift in the room when the protesters realized that, yeah, they were running a risk of arrest and expulsion. You can’t really go to that well too often, but when it works, it works…

The horror: “Police made arrests as demonstrators marched in downtown Oakland against the city’s new get-tough policy for monitoring street protests — the second such gathering in as many days… Officers watched closely Sunday night as the protesters marched several blocks. About 100 to 150 people marched before organizers ended the event and then a group of 15 to 20 started another protest, spokeswoman Johnna A. Watson said.”  Basically, the city of Oakland has decided that protesters need to stay on the sidewalks, and not take over the streets – and, not incidentally, refrain from destroying people’s cars.

Oakland, as you probably know, has what protesters would probably call ‘a vibrant commitment to social justice culture’ and everybody else would call ‘a sometimes literally bloody nuisance.’ To give you an idea: protest culture is so, ah, vibrant that in 2003 freaking Moonbeam Brown (who was then mayor of Oakland) felt the need to disperse the crowds with wooden and rubber bullets.  It takes a good deal of skill and ingenuity to be too over the top for a hardcore liberal icon like Jerry Brown, but then I guess that any group that thinks that it needs to have formal pre- and post-protest protests is probably up to the challenge. END_OF_DOCUMENT_TOKEN_TO_BE_REPLACED

Not to be impolite about this, but one thing is absolutely certain about these violent San Francisco protesters (all bolding mine):

Shopkeepers lowered metal gates to protect their entries while shoppers with children dashed inside the giant Macy’s store and cowered behind locked doors. Some protesters broke shop windows and screamed at police, while others threw objects including bottles at officers.

…not a one of ’em vote Republican.  Most would, in fact, chew off their own legs before voting Republican. I would not care to bet any money that none of them would be opposed to putting people like me in a Stalin-era work camp.  Or people like you. END_OF_DOCUMENT_TOKEN_TO_BE_REPLACED

Drawing on this, this, and this… I’ll be honest.  I was expecting a good deal more in the way of organized protests in [Tampa: oops!] than what actually ended up being the case.  So were various other folks; but we were all more or less startled to discovered that, compared to ’08, the ’12 antics were lame, sparse, and not particularly active.

Despite what appears to be (at best) some dodgy involvement by government agencies to, ah, ‘help out’…

You know, the one who – according to multiple accounts – broke through the Secret Service cordon at today’s Paul Ryan rally at the Iowa State Fair, rushed the stage, then assaulted someone in the crowd on her way to jail.  Now, heckling is fine – and if you watch the video here, you’ll see why* – but if you’re sufficiently unhinged as to take a swing at somebody when they’re removing you from the stage, guess what?  They’re right to remove you from the stage.  By definition.

Now, I’m not going to make this a full-fledged snarl, but let me clue in Obama for America: you idiots dodged a bullet today.  Whoever it was that sent that woman out there – and let’s not pretend that OfA isn’t encouraging counter-protests – screwed up by winding up and setting loose a potentially dangerous obsessive.  Fire whichever particular idiot did it, review and revamp your entire procedure – or it will happen again.

You may not be so lucky next time.

*Short version: people that unhinged don’t move the needle for the side that they are putatively on.  Thankfully.

I mean, I see the news van.  The protesters that would justify it?  Not so much.

(H/T Instapundit) Let me show you this picture: it’s from House [Budget**] chair Paul Ryan’s speech this morning (04/26/2012) at Georgetown. Specifically, it’s the protest at Georgetown: 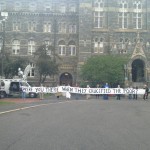 Picture via John McCormack (via Twitchy): John is also noting that there weren’t many protesters inside, either, and that things went off without a hitch. Which is, of course, the way that these things should go; and I have no serious quibbles with the people who showed up with their signs and their long, hysterically demented, giant typewriter ribbon of protest and their pet news media van. They’re entitled to do it; and, hey, they showed up.

So where’s the rest of them? END_OF_DOCUMENT_TOKEN_TO_BE_REPLACED

The line between the two can get blurry in the Middle East, but it’s being reported that the Assad regime have escalating what has been a steadily-deteriorating situations in Syria.  The death toll from yesterday is… well, Syria is keeping foreign reporters out, which makes getting an accurate count correct; but what is getting out is consistent with the Syrians using lethal means to enforce a crackdown.

Meanwhile, we’re issuing stern statements.  One half of Hot Air – reasonably enough – asks what else the Obama administration could be doing right now; the other half of Hot Air – also reasonably enough – comments that one thing that we could be doing would be to at least suggest that the Assad regime should relinquish power.  I mean, when a dictator’s firing on his own people already, just how much more upset and repressive is he likely to get if the USA formally calls for his ouster? END_OF_DOCUMENT_TOKEN_TO_BE_REPLACED

Yes, they are going to regret their arrogant use of the original line.

I apologize in advance for the foul language that the Democratic shill for Big Labor – or Big Labor lackey for Democrats, if that makes any difference at this point – in the video below used while verbally attacking a fourteen year old girl (Tricia Willoughby); but it’s important that people see what the Republican party, the Tea Party movement, and conservatives in general are up against.  Here is said shill/lackey, in all his glory:

For those without video access: it shows an angry, middle-aged, probably union and certainly uncouth… person… screaming abuse and at least one unimaginative obscenity at Ms. Willoughby as she spoke at a Madison Tax Day Tea Party event. “Spoiled brat” was the mildest thing that the… person… called her, in between demands that she either go to her room, or get a job. While there is a certain irony in watching the aforementioned Big Labor/Democratic shill/lackey publicly demand that Ms. Willoughby violate child labor laws, there are two things that need to be noted here. One, this is not what democracy in Wisconsin looks like – but as the title notes, this is increasingly what Democrats in Wisconsin look like. END_OF_DOCUMENT_TOKEN_TO_BE_REPLACED