It’s official: the last remaining ostensibly politically viable member of the once-powerful Carnahan dynasty has decided to not seek a third term.  I say ‘ostensibly’ because it was actually unclear that Robin Carnahan was ever going to recover from her humiliating shellacking at the hands of Roy Blunt in last year’s MO-SEN race (13 points is pretty bad).  And I say ‘last remaining’ because her brother Russ Carnahan is, metaphorically speaking, a dead man walking: the Missouri legislature took the opportunity offered by redistricting to excise Carnahan’s seat in a heroic act of political eugenics.

As you may have guessed from the above, I am not particularly enamored of the Carnahan dynasty.  Truth be told, I mistrust any American political dynasty that doesn’t have John Adams as a primary genetic ancestor: frankly, they tend to turn to the bad by the third generation*. So you can imagine that the news that Robin is not going to wait around to be tossed out of office is a pleasant one for me… particularly since it means that Tom Carnahan has a little bit of a patronage problem now for his wind business.  As in, a little bit of a lack of patronage problem. END_OF_DOCUMENT_TOKEN_TO_BE_REPLACED

The below is being floated as a potential redistricting map for Missouri: 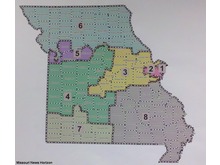 I’ll summarize the changes as follows: Missouri loses a district, thanks to the 2010 Census. On the Republican side, Vicki Hartzler is liking this map least: she had some R areas taken away from her and given to Emanuel Cleaver, and has been given some D areas from Luetkemeyer.  On the other hand, on the Democratic side Cleaver’s district is now somewhat less urban.  This is not necessarily a disaster for Cleaver: he’s that rarity, a Democratic African-American that white Democrats will vote for anyway.  But the really nice news?  Russ Carnahan’s district was chopped up like a chicken for the stewpot: half of it went to Jo Ann Emerson (who didn’t break a sweat winning last year with 65% of the vote) and the rest looks like it’s in William Clay’s (majority-minority).  Bottom line: I am not an expert on Missouri county vote totals, but it looks like Missouri’s going to go from 6R/3D to 6R/2D. END_OF_DOCUMENT_TOKEN_TO_BE_REPLACED

The video is largely self-explanatory, but here is the time-line, with links.

The question raised by this WJS correction is a real head-scratcher in that regard:

Missouri Secretary of State Robin Carnahan, a Democrat, is running against Republican Rep. Roy Blunt for U.S. Senate. Lee Fisher, the lieutenant governor of Ohio, is running for the U.S. Senate in his state. In some editions Tuesday, a front-page article about political spending for Republican candidates incorrectly said that Rep. Blunt is running against Mr. Fisher and that Mr. Fisher is Missouri’s lieutenant governor.

Ach, well, it’ll be academic starting next January anyway.  For both of them.

I understand what the Roy Blunt campaign is doing here, and they’re not wrong to bring it up. But it’s not the whole story.

The problem here is not that Robin Carnahan called Missouri a ‘mecca of progressivism.’  It’s not, and she didn’t mean it in that way anyway: her sarcasm and disdain for the people of Missouri who don’t think like her comes across, loud and clear.  But even that’s not the problem here. In fact, the problem here is her palpable contempt for not only Missourians (you get the feeling that one of the perks of a Senate seat for Robin Carnahan would be her getting away and staying away from flyover country for months at a time), but also the very progressives that she’s trying to woo.  END_OF_DOCUMENT_TOKEN_TO_BE_REPLACED

It seems that one of their campaign’s guys (Kansas City Councilman Bill Skaggs) got a little grabby and profane with a Republican video tracker.  By that I mean that Skaggs apparently laid hands on the video tracker, threatened him, swore at him (not bleeped out on the video below, so keep that in mind), and called him ‘boy’*.  Funny how these people hate being on the receiving end of the exact same observation tactics that they so exhaustively used in years past, isn’t it?

Skaggs didn’t apologize for anything except the profanity, thus requiring the Robin Carnahan campaign to take time out from their sinking Senatorial campaign to issue this statement:

“Robin does not condone this type of unacceptable behavior and it is a distraction from the real issues that matter in this campaign.”

So, I guess that means that Councilman Bill Skaggs has been asked to disassociate himself from the campaign, right? Seeing as they don’t condone this, and everything. No? Well, I suppose that makes a certain amount of sense: at this point, Robin Carnahan can’t exactly afford to alienate any of the people still planning to vote for her in November…

PS: Roy Blunt for Senate. Not getting grabby with your person or your wallet. END_OF_DOCUMENT_TOKEN_TO_BE_REPLACED

Sorry, just getting into the spirit of things:

Personally, I would have said that the Adam West Batman

was far too cool and sophisticated to be associated with Robin Carnahan; she’s much more identifiable with the infamous Batman & Robin

* version. Still, doing it this way let us watch men in suits fight with farm implements, so I supposed that it’s for the best.

(All links via 24thState, which is pretty much your go-to site for Missouri politics these days.)

On the Internet, that is. So, when the Blunt campaign (accurately) notes that you were ““a banking executive” in Washington at the government’s Export-Import Bank,” and you argue instead that your “position in the 1990s was assistant to the chairman” – thus suggesting that you were in fact not a real “banking executive” – here’s some places that you should try to get sanitized:

END_OF_DOCUMENT_TOKEN_TO_BE_REPLACED

…at least that’s the question asked by 24thState:

Now, far be it from me to tell the Secretary of State of Missouri that it’s disrespectful to put the state flag of Missouri to the right and put the United States Flag to the left, but maybe she’s trying to tell us something?  Is she one of those dreaded Tenthers?  She’s run away and to the right of Barack Obama on every issue since he came to town – maybe she’s joining Peter Kinder in asserting Missouri’s constitutional rights?

…Nah, the truth is she’s just got a lot of dolts working for her who not only don’t know the Flag Code, but wouldn’t take it seriously if they did. For that matter, she didn’t notice, either. Ah, the Carnahans; I shall miss them, when they’re gone…

PS: Roy Blunt for Senate. Old Glory on the right.

END_OF_DOCUMENT_TOKEN_TO_BE_REPLACED

While Carnahan’s response to the first question might be at least considered a standard attempt at mealy-mouthing, and thus not overly outrageous; I cannot imagine how any progressive watching that could be pleased at her ‘answer’ to the second question.  Every credible side in the health care dispute concedes that the Stupak amendment is relevant to the discussion, and people are keeping track of who has what opinion of it.  Robin Carnahan’s going to have to choose a side.

PS: What exactly did the Carnahan family do in Missouri to justify their quasi-hereditary political status in that state?  Save St. Louis from a rampaging Mississippi River monster?

*See here and here for the reference.